The Fictional War Between Indonesia and Australia 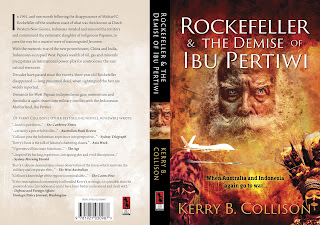 The Fictional War Between Indonesia and Australia
'Rockefeller and the Demise of Ibu Pertiwi' is a history-based fictional account of how Australia and Indonesia come to blows over the question of a UN-sponsored referendum in West Papua and Papua. (Photo courtesy of Johannes Nugroho)

"The US Embassy had officially informed the Indonesian government … an unspecified number of B-2 bombers flew from Darwin over to Ujung Pandang where the Indonesian Air Forced based Hawk 19s and F-16s …," "… the HMAS Stephenson launched two of its 20 Mark 48 ADCAP torpedoes directly into Kampung Mas Port, where the Indonesian warship KRI Yos Sudarso was anchored."
The dire-sounding passages come from Kerry B. Collison's latest political thriller "Rockefeller and the Demise of Ibu Pertiwi," a history-based fictional account of how Australia and Indonesia come to blows over the question of a UN-sponsored referendum in West Papua and Papua, which will determine whether the two provinces remain in the unitary state of Indonesia or secede to form an independent country.
While the main storyline revolves around West Papuan activism, its leaders, Indonesian politics and international geopolitics, the book ─ like any good TV show today ─ incorporates a few sub-plots, one of which is the 1961 mysterious disappearance of Michael C. Rockefeller, heir to the family’s fortune, of the southern coast of Papua, hence the title.

The Rockefeller theme offers the reader escapade into historical sleuthing as the book seeks to explain an event that remains a mystery of our time, simultaneously weaving it into the West Papuan narrative seamlessly. Collison's choice of subplot is interesting, given that there are a fair few conspiracy theories surrounding Rockefeller's presence in Papua and the subsequent gold and copper mining at Grasberg by the American mining giant Freeport McMoran.
On a personal level, the book follows the lives of characters like Bennie Tabuni, the de facto leader of the West Papua's government in exile, his name echoing that of Benny Wenda; Jules Heynneman, the half-Dutch Papuan who was raised alongside Bennie by the Tabunis. There is also Alice Heynneman, officially Jules' daughter but in fact the offspring of Bennie, whose character matures as the story unfolds.
On the Indonesian side, the country is governed by the democratically elected President Abdul Moewardi, whose libertarian political outlook on West Papua is reminiscent of Indonesia's fourth President Abdurrahman Wahid's, better known as Gus Dur. Abdul's daughter is married to Indonesian Military chief Gen. Sumantri, who harbors political ambitions for himself and his son — mercurial and egocentric Col. Didi Sumantri, who may have been partially inspired by the figure of Prabowo Subianto.
In the meantime, Collison has Australia under the leadership of Prime Minister John Gorton, a somewhat uninspiring figure who then surprises us with his decisiveness and a touch of ruthlessness, qualities which remind us of the former Prime Minister John Howard.
What is noteworthy, the author presents us with less colorful and more predictable characters on the Australian side. In doing so, he inadvertently highlights the difference between Indonesian and Australian democracies, the former still dependent on strong figures who dare cross boundaries that are taboo in more developed democracies.
Even though the storyline outlined in the book is undoubtedly fictional, it is by no means improbable. In an age where political and economic projections are constantly made, Collison's well-crafted scenarios do not strike as outlandish, given the right circumstances. As an ex intelligence officer and a former diplomat, he no doubt has the credentials and experience as both an insider as well as an observer.
Immensely readable, the book also makes us cognizant of the infinitely more complex geopolitical realities of today than those, for instance, when Timor Leste embarked on its path to independence. It takes into account the rise of China as a regional hegemon and an active player in international politics. China's new found assertiveness, Collison ably shows, also impacts and complicates the old alliances between Anglosphere nations such as the United Kingdom, the United States, Australia and New Zealand.
The book is also full of subtle warnings for Indonesia. It exposes the weaknesses in the country's dogged and "non-negotiable" stance on the integrity of the Republic of Indonesia ("NKRI Harga Mati") when geopolitical realities experience fluxes in real life. It also shows that the hyper-nationalism taught to all Indonesians from an early age could ultimately do disservice to the future of the nation.
More importantly, it shows us the irony of Indonesia’s occupation of West Papua, given that Indonesia was once a victim of colonialism. The atrocities committed by Indonesian military against local West Papuans and the exploitation of their natural resources are a potent reminder that, as in the case of East Timor, the West Papuan "problem" is too far gone for Jakarta to wish away.
Papuan "separatism" is no doubt one of the most current vexing questions in Indonesian international diplomacy. The recent questions at the United Nations General Assembly particularly by several Pacific nations, New Zealand and EU countries about the continued human rights transgressions in West Papua were another wake-up call for Jakarta that the "noise" may get louder in the future.
Kerry B. Collison's Rockefeller and the Demise of Ibu Pertiwi is essentially an essay on how not to conduct international diplomacy on a thorny issue like West Papua. He is no stranger to Indonesian themes, having previously written a number of histo-fictional novels on Indonesia such as "Indonesian Gold" and "The Asian Trilogy: Jakarta, Merdeka Square" and "The Timor Man."
In exploring less than ideal scenarios between two neighbors like Indonesia and Australia, the author may well be suggesting that we can basically do better to foster trust between ourselves, and the futility in suppressing the yearning for freedom and human dignity.
Johannes Nugroho is a writer from Surabaya. He can be contacted at johannes@nonacris.com and on Twitter @Johannes_nos.
Posted by Kerry B. Collison at 12:21 PM