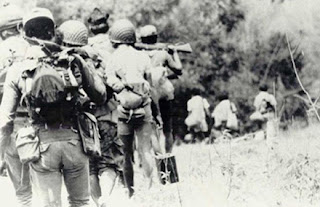 November 2016 - On the 25th anniversary of the Santa Cruz massacre, the East Timor and Indonesia Action Network (ETAN) urges the international community to commit to ending impunity for the human rights crimes committed during the occupation of Timor-Leste.

"The victims of the Santa Cruz massacre have waited too long for justice," said John M. Miller, National Coordinator of ETAN. “Those responsible for crimes against humanity and war crimes during Indonesia’s illegal occupation need to be held accountable for their crimes.”


"We believed that an international tribunal is needed to credibly try those responsible for the Santa Cruz massacre and other crimes against humanity and war crimes committed by Indonesia during its illegal occupation of Timor-Leste," Miller added


On November 12, 1991, U.S-armed Indonesian troops opened fire on a peaceful pro-independence demonstration calling for self-determination and protesting atrocities committed by the Indonesian military. More than 271 East Timorese were killed or died soon after and an equal number disappeared and are believed to be dead.


The 1991 massacre -- witnessed and filmed by foreign journalists -- was a major turning point in Timor-Leste's struggle for liberation.


During more than two decades of U.S..-backed occupation, Indonesian soldiers committed serious crimes with impunity, taking as many as 184,000 Timorese lives and torturing, raping, and displacing countless others. Timor-Leste became independent in 2002.

"The East Timorese people will need to know the where  the bodies of their relatives and friends are," said Miller. "Impunity for decades of systematic Indonesian military and police atrocities prevents both Timor-Leste and Indonesia from consolidating the rule of law as they transition from military dictatorship to democracy."