Commentary: Why Does the Indonesian State Refuse to Confess to the 1965 Massacre? 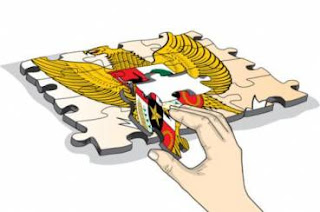 The Pancasila Monument in Lubang Buaya in East Jakarta is one of President Suharto's New Order regime's controversial legacies — presenting only government-approved propaganda about what happened during the anti-communist purge of 1965-66. (Antara Photo/M. A
Survivor of the concentration camp on Buru Island, Hersri Setiawan, writes in his "Memoar Pulau Buru" (2016) that the most disastrous legacy of Suharto regime was the creation of what he calls "kinthel nation." Kinthel is a small brown toad which immediately conceals itself when touched; it blends in with litter. The term was first used by Indonesia's first president Sukarno.


"Kinthel nation" is cowardly and insecure. It lacks in courage to face and evaluate the social reality, to receive criticizm, to flourish. Sukarno's fear of Indonesia becoming a kinthel nation were materialized in the statement of the then Chief Security Minister Luhut Binsar Pandjaitan who claimed that Indonesia is a great nation but at the same time denied the decision of the International People's Tribunal on 1965 Crimes Against Humanity. The tribunal saw the Indonesian state responsible for purges in which more than 800.000 of its citizens were slain.


Pandjaitan's refusal to follow the tribunal's recommendations shows that the dominant forces inside President Joko "Jokowi" Widodo's government continue the legacy of his predecessors (except for KH Abdurrahman Wahid) of burying the truth about the state involvement in 1965 massacres.


The government's stance is ambivalent; contradictory standpoints are observed among the cabinet members. can be seen position between two camps approach inside this regime. The hardliner position is represented by Defense Minister Ryamizard Ryacudu who refutes all attempts to uncover the truth behind the 1965 massacres and sees the efforts to discuss them publicly as maneuvers of neo-communists to destabilize the country.


The more moderate faction is represented by Luhut Binsar Pandjaitan who allowed to open a discussion on these traumatic historical events. However, his refusal to accept the tribunal's recommendation and advance the state investigation shows that commitment was only halfhearted .


From the political perspective, the government's reluctance to reveal the state engagement and participation of the right wing social forces in the purges, as well as no apparent will to prosecute the perpetrators, cannot be isolated from the calculation of power, interests and social struggles.


The post-authoritarian constellation of power and its connections with Suharto regime, explain the government's reluctance to face the 1965 tragedy and indicate that the present political configuration in Indonesia is a continuation rather than cessation of Suharto's New Order.


The official selection of which historical events should be remembered and preserved, or forgotten and excluded is connected to the matter of legitimation of power. In the concrete historical social struggle in Indonesia, the annihilation of leftist and nationalist-populist groups in the '65 pogrom paved the way for Suharto and his social alliances to seek and preserve their power by creating socio-political architecture which guarantees the absent of strong social forces to challenge the authoritarian rule and highly predatory capitalist state.


The accusation of a leftist group that tried to betray this nation and Suharto military forces and its right wing social alliances respond through extreme violence activities should be narrated in official history as sacred duty to save the nation from communist threat. The regime hegemonic capacity to control the past ('65 tragedy) by explaining this moment not as state apparatus violence against its citizen, but as military and its social alliances responsible under Suharto leadership to protect this nation by leftist purge become their crucial legitimation to rule Indonesia.


Furthermore the fall of Suharto in 1998 did not make a political change in the context of Indonesia power constellation. The military, politicians, bureaucracy, businessmen as well as social activist who support Suharto regime also obtained their power and wealth resources from New Order protection can be able to adapt the new political circumstance in reform era by creating new politico-business alliances.


Based on political economic interests of the recently dominant power in Indonesia, they still need a historical legitimation of their social roots as protector of this nation, instead of uncovering the truth that explained their social group's participation in the '65 massacres as part of human right violation and manifestation of state crime activity toward its people.


However, the state's denial to confess what happened in '65 and state the human rights violation toward its people is not without consequences for Indonesia's future destiny. The social history of Indonesia from the Suharto era shows that state violence towards its citizens in order to suppress the critical voice that refers to '65 annihilation has been replicated as a power pattern and still continues until this moment, even though the political institution has been changed from authoritarian toward democracy. Therefore, this country needs a confession about state failure in order to rehabilitate social life.


Without a state commitment to admit its responsibility to violence activity in '65, we will always be haunted by the spiral of violence by the state apparatus into our people which occurred in Papua, or the marginalization of minority groups in some areas. Therefore, we will be cursed as kinthel nation, instead of a great nation which can evaluate its own failure in the past.

Airlangga Pribadi Kusman is a lecturer at the Faculty of Social and Political Science, Airlangga University, Surabaya. He obtained his PhD from the Asia Research Center, Murdoch University, Perth.