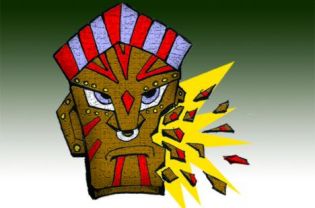 In this June 14, 2015, photo, residents of Bukit Duri, South Jakarta, hold up a sign saying they refuse to accept any activities carried out by the Ahmadiyah community, a Muslim minority sect. (Antara Photo/Akbar Nugroho
Zulfa Nur Rohman, a student at a vocational public school in Semarang, Central Java, failed the 11th grade because of his religious faith. School administrators informed Zulfa, an adherent of a Javanese traditional faith Hayu Ningrat, that he cannot continue on to grade 12 because he refused to participate in “the practice of reading the Quran and performing prayer” in a mandatory Islamic studies class.


Zulfa is a victim of the pernicious and routine bureaucratic discrimination against religious minorities in Indonesia.


They are victims of regulations that discriminate against religious minorities, ranging from the provision of official identification cards, birth and marriage certificates, religious education and access to other government services.


Like all parents in Indonesia, Zulfa’s parents had to register his faith when enrolling him in kindergarten. Because Hayu Ningrat was not an officially permitted option, they opted to register him as a Muslim. School officials contended that Zulfa’s  official identification as a Muslim obligated him to fully participate in his Islamic studies class and that his refusal to do so required him to repeat 11th grade, including Islamic studies. Zulfa always did the non-practicing studies until grade 11 when he was asked to pray and to recite the shahada.


The school’s principal, Sudarmanto, had no qualms about the school’s decision to penalize Zulfa for refusing to participate in Muslim prayer practice.


“I reminded his parents if he keeps on refusing to pray, his religion score will be zero and he cannot move to grade 12,” Sudarmanto told Tempo.  Zulfa has refused to attend school while education administrators evaluate his parents’ appeal of the decision.


Indonesian government policies have encouraged discriminatory religious teaching in the country’s public school system. Then-president Susilo Bambang Yudhoyono in 2007 issued a government regulation that placed religious education under the domain of the Ministry of Religious Affairs. It gave the ministry parity with the Ministry of Education in formulating educational policy. Yudhoyono also introduced a requirement that all schools, both public and private, must provide devotional education in the six officially recognized religions from kindergarten to university. That directive automatically excluded minority religions such as Zulfa’s Hayu Ningrat.


In 2010, then-minister of religious affairs Suryadharma Ali issued a directive requiring schools to provide a teacher of one of the six officially recognized religions in every school that has at least 15 students belonging to one of those religions. That rule excludes students from religious minorities having education about their own faiths.


Indonesian law likewise excludes Muslim minorities — notably the Shia and Ahmadiyah — from access to teachers of their religious faith in public schools. These minority communities have been subject to intimidation and physical attack  by militant Islamists in the conservative Sunni provinces of West Java, Aceh and West Sumatra with the complicity of government officials and security forces.


State-sanctioned religious discrimination is likely to plague Zulfa long after he eventually graduates from high school. When he turns 17, he will be able to apply for an official national ID card. Although Indonesian law has since 2006 not required Indonesians to officially declare a religion in order to receive a national ID card, many civil servants still do not know of the new law and deny  the cards to religious minorities if they refuse to choose one of the six religions.


Members of religious minorities who opt to leave blank the ID card’s religion column can be accused by government officials of being an atheist — which is punishable under the blasphemy law. If they select one of the six religions now offered, regardless of their own religious beliefs, they can be accused of falsifying their identity.


President Joko "Jokowi" Widodo and his cabinet should review and repeal all of Indonesia’s discriminatory regulations against religious minorities. Until Zulfa and the thousands of other members of religious minorities have the same rights as those who belong to the officially recognized religions, the religious freedom guarantees in Indonesia’s Constitution will remain empty promises.