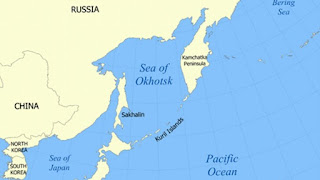 
Location of the Kuril Islands in the Western Pacific between Japan and the Kamchatka Peninsula of Russia. Source: Wikipedia Commons. 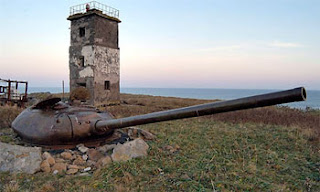 Meeting in Russia’s Black Sea resort of Sochi on May 6Prime Minister Shinzo Abe and President Vladimir Putin agreed that Japan and Russia would engage in more dialogue to craft a new approach to resolving the differences that have prevented their countries from signing a peace treaty for more than seven decades since the end of the Second World War. What the new approach to negotiations on a peace accord and on the contentious issue of the Kuril Islands/Northern Territories would entail is unclear.


Russia seized the islands from Japan after World War II and refuses to return them to Japan.


International politics and geography have created a strategically complicated area. Lying between the northern Japanese island of Hokkaido and Russia’s Kamchatka Peninsula, the Kurils separate the Sea of Okhotsk, off Russia’s eastern coast, from the Pacific Ocean.


Tokyo’s long-held position is that a settlement of the dispute over the islands’ sovereignty must precede the conclusion of a deal with Moscow. But Russia insists that a peace pact and the territorial row are not directly linked.


What explains Russia’s stance? Moscow’s determination to uphold Russia’s world status and protect its strategic interests will shape the outcome of any future talks.


Tokyo’s collaboration with the West in imposing sanctions on Russia after it severed Crimea from Ukraine in 2014 is not the main reason for the failure of Japan and Russia to sign a peace accord or resolve differences over the Kurils: in fact agreement on both issues has eluded them since 1945. Putin underlined this fact less than three weeks before he met Abe. His statement that a compromise might be found ‘one day’ on the Kurils was prefaced with the acknowledgement that Japan and Russia had failed to solve their problems since the end of the Second World War.


Russia’s attitude to the Kurils should be seen in relation to its concept of its global standing and strategic interests. Russia sees its Far Eastern region (RFE) – which covers almost 40 percent of its territory – confirming its Eurasian, Asia-Pacific and world status. In other words, Russia’s geopolitical position entitles it to be an Asian and global power. That is why Putin views the RFE as his foremost geopolitical concern and national priority of the 21st century.


Russia has much to lose by presenting the Kuril islands to Japan. The Kurils are of great strategic importance to Russia because they maintain the access of its Pacific Fleet to the Pacific Ocean and play a critical role in Russia’s nuclear deterrence strategy. The Pacific Fleet, with its headquarters in the port of Vladivostok, is one of Russia’s two most powerful naval forces.


By giving the Kurils to Japan, Moscow would facilitate the US navy’s entry into Pacific waters dangerously close to Russia – while restricting if not blocking its own sea routes to the Pacific. Either of these outcomes would harm Russia’s security.


At another level, over the last year, Russia’s decisions to build military facilities on the Iturup and Kunashir islands, which are part of the Kurils, and to deploy new military hardware to the Kurils hardly suggest that Russia intends to hand them over to Japan.


So Russia will stand pat – and not just because it wants to keep its flag flying over the Kurils. An economically messy but politically ambitious Russia wants to exert its diplomatic and political influence over the Asia-Pacific. And since becoming president in 2000 Putin has also striven to develop the RFE. Russia will not display weakness on territorial issues, especially at a time when it is under economic pressure from the west and has been treated as an international pariah by the G7. Aware that Japan will maintain the sanctions it has imposed on Russia in association with the West, Moscow has run Japan down. In his patronizing bureaucratese Sergei Lavrov, the Russian Foreign Minister, recently expressed regret that ‘Japan is not the only country that is not entirely independent in its foreign policy actions. Of course, we would like to see such a large and powerful country like Japan to have more weight in international affairs’.


Japan could certainly offer Russia badly needed investment in its resource-rich RFE and help to develop water governance, infrastructure and agricultural land. Whether such investment would encourage a new “take” on political differences remains to be seen.

As Russia and Japan try to strengthen economic ties they will engage in more diplomatic parleys on the Kurils and a peace treaty. But one of the great lessons learned from diplomatic practice is that the outcome of negotiations over contested territory reflects the realities of military power on the ground.