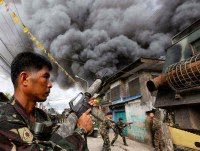 Philippine troops on Friday battled Abu Sayyaf militants blamed for the kidnappings of several foreigners and Filipinos in the restive south, leaving at least five soldiers and nine extremists dead.

At least 26 other soldiers and more than 30 Abu Sayyaf gunmen were wounded in the clashes that raged for five hours in Sulu province's mountainous Talipao town, army Col. Allan Arrojado said. The fighting eased by nightfall and government forces were pursuing about 300 militants who split into smaller groups and withdrew, he said.

He described it as "a major encounter," and added in a text message, "We are tracking their whereabouts."

A military officer involved in the fighting said another soldier was missing and the wounded troops would be airlifted to a military hospital. He spoke on condition of anonymity because he was not authorized to talk to reporters about the ongoing operation.

The militants were reportedly under Radulan Sahiron, a one-armed Abu Sayyaf commander long wanted by the U.S. and Philippine governments for alleged involvement in many terrorist attacks and kidnappings. It was not immediately clear if the militant, now in his 70s, was directly involved in the fighting.

President Benigno Aquino III has ordered the military to crack down on the militants after they freed two German tourists on Oct. 17, reportedly after a large ransom payment. It led to concerns that the money could be used by the resilient Abu Sayyaf to acquire more weapons.

A confidential government intelligence report seen by The Associated Press said Sawadjaan, who was behind the Germans' kidnappings, shared the ransom money with other Abu Sayyaf commanders, including Puruji Indama, a militant blamed for bombings and beheadings on nearby Basilan island. It said Indama planned to use the money and borrow some more from Sawadjaan to purchase a number of lightweight artillery anti-tank weapons that are popular among the militants.

An Abu Sayyaf spokesman, Moammar Askali, earlier claimed in a radio interview that his group received a 250 million-peso ($5.6 million) ransom for the Germans' release, but the military says his claim needs to be validated.

The militants are holding several other hostages in Sulu's dense jungles, including two European birdwatchers who were seized more than two years ago and a Malaysian police officer who was recently abducted in Malaysia's Sabah state on Borneo Island, a few hours away by speedboat from Sulu.

The Abu Sayyaf, a loose grouping of about 400 mostly poor rural fighters, has turned to ransom kidnappings, extortion and other crimes to endure years of battle setbacks dealt by U.S. military-backed Philippine offensives.

The extremist group has had links to the al-Qaida network and is on a U.S. list of terrorist organizations for deadly bombings, kidnappings and beheadings.


The Associated Press By Jim Gomez
Posted by Kerry B. Collison at 12:35 PM