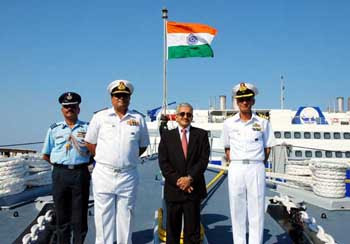 As US power wanes and China's waxes, other countries start looking for allies
As US power declines along with its role as Asia's peacemaker and tensions rise, Vietnam has been looking abroad for potential allies in hedging against Chinese hegemony in the region. India, with its own strategic concerns about Beijing, is emerging as a prospective benefactor and partner.

The urgency of Vietnam's search for new allies came into sharp relief after Chinese naval vessels cut the cables of two Vietnamese oil exploration ships in May and June 2011, well within what Vietnam considers its Exclusive Economic Zone in the South China Sea -- called the East Sea by the Vietnamese. The incident kicked off weeks of demonstrations in Vietnam -- a rarity in a country run by a repressive government that allows few demonstrations of any kind. Eleven anti-China protests were held between June and August.

“It was a big shock that basically mobilized a lot of Vietnamese public opinion against China. It also forced quite a number of Vietnamese political and military leaders to state unequivocally their stance on South China Sea, and how to deal with China on that issue,” says David Koh, an expert on Vietnamese politics and civil society at the Institute of Southeast Asian Studies.

“Initially the demonstrations served the government’s purpose because they signaled to China that its assertiveness in the South China Sea was having a counterproductive impact on bilateral relations,” says Carlyle Thayer, a professor of Vietnamese domestic politics at the University of New South Wales.

However, these rare expressions of public sentiment were eventually halted by force. “As the demonstrations wore on they became a potential liability on the Vietnamese government’s diplomatic approaches to China,” Thayer says.

The fact is that Vietnam can't afford to push China too far because of the asymmetry of their relationship. “I have termed this the tyranny of geography,” says Thayer, “Vietnam can't pick its neighbor. At 89 million people or the 12th most populous country in the world, Vietnam is only a middle sized Chinese province. The Vietnamese government is divided between those who understand the need to act with prudence towards China and those who would like to see a more assertive stance. ”

Instead of directly antagonizing the Chinese, Vietnam has chosen to look elsewhere for support. At the East Asia Summit in November 2011, other countries in the region joined together with the United States to demand that maritime disputes be resolved multilaterally, rather than bilaterally as China prefers.

“This form of assertiveness in the South China and East China Sea is not confined to Vietnam. This is part of a broader assertiveness [from China]. This concerns all of China’s neighbors who share land and maritime borders with China. At the East Asia Summit it was made clear to China that they cannot approach this bilaterally, it needs to be multilaterally,” said Gopalapuram Parthasarathy, the former Indian Ambassador to Myanmar.

As an indication of that concern, Vietnam's defense minister. Gen. Phuong Quang Thanh, invited Myanmar's top military official, Gen. Min Aung Hlaing, to make his first trip abroad in November to Vietnam. Min Aung Hlaing did so, conspicuously not choosing China as his predecessors have done. Although there was no detailed announcement of the defense chief's itinerary, military observers say the visit was intended to both cement bilateral cooperation between the two countries as well as signaling an attempt to put some space between Myanmar's previous close relationship to China.

"China realizes that India represents one of a number of countries that are concerned about its assertiveness in the South China Sea. China therefore fears that an anti-China coalition may emerge," Thayer said.

India remains the major new focus of Vietnam's diplomacy. The Vietnamese President, Trung Tan Sang, visited India for the first time in October. “It was a significant visit and I think the timing of the visit was serendipitous. India is one strong anchor to the far west of the Asia continent for Vietnam,” Koh says.

Vietnam has sought cooperation from India in the form of military training, with both countries using Russian equipment extensively. They are also expected to purchase submarines and are hoping to get approval to buy land-based anti-ship cruise missiles from the South Asians.

In exchange, India gets to partake in Vietnam’s oil hunt, and perhaps more significantly their navy gets to use the Vietnamese port of Nha Trang, which could result in a significant Indian naval presence in the South China Sea.

The South China Sea plays an important part in India’s strategic considerations. As former ambassador Parthasarathy points out, 40 percent of Indian trade with the US goes through the South and East China seas, as does trade with Korea and Japan, two of India’s biggest trade partners.

Then there’s the oil. “Everybody gains from oil explorations. China cannot dictate to us where we look for oil,” Parthasarathy says.

The largest democracy in the world has considerable beef with its communist counterpart. There are major territorial disputes over large swathes of the land border shared by the two neighbors. India is nervous too about the pace of Chinese growth, and what it views as Chinese incursions into the Indian Ocean. China has recently built ports in Sri Lanka and Myanmar.

China has also been called the “all-weather friend” of India’s arch-rival Pakistan, who is regarded by Beijing as a way to box in New Delhi’s ambitions in Central Asia.

Analysts warn that China will take kindly to India’s move into its backyard. “Can there be advantages for China if the India navy has the occasional cruise in the South China Sea?” Koh asks.

“The negatives for China are immanent, not imminent. It establishes the precedent of the presence of out-of-area navies in the disputed areas,” says Bharat Karnad, a former member of the National Security Council of India.

But hawks in India like Parthasarathy want to see their country bring China back a peg or two, and increased friendship with Vietnam is one way to achieve this goal.

“We are not claiming the Indian Ocean as Indian territory, like the Chinese are with the South China Sea,” Parthasarathy says. “Our relations [with Vietnam] have been good even before Chinese-Vietnam relations soured. We were one of the guys who said no to the American war, we made our displeasure quite clear.”

“The Chinese are operating all over our backyard, why should they get bothered about this? If you think we’re running scared of the Chinese I can assure you we’re not,” he concluded.
Asia Sentinel
Posted by Kerry B. Collison at 12:12 PM