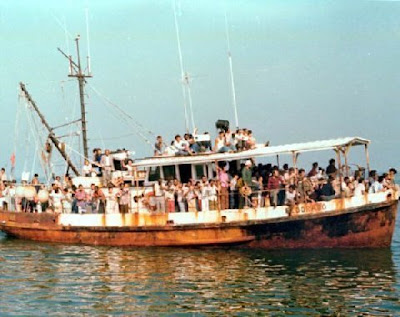 PROPER refugees deserve to be differentiated from those who leave their homes for less dire reasons, such as economic migrants. Sometimes as political dissidents of autocratic regimes and sometimes for simply being different, these displaced people need only temporary safe havens from persecution and imprisonment or, worse, death if they remained in their countries of origin. That is why exile is preferable and they are indeed distinct from those who take advantage, as did many when South Vietnam fell, to flee to richer countries. For the latter, the procedures are clear: work permits are given for jobs already waiting for them. When they violate this, naturally they are detained and then deported, which is part of what causes the confusion resulting in the alleged mistreatment of those looking for safe harbour.

Malaysia is not a signatory to the United Nations Refugees Convention of 1951 and this means that the country is not obliged by international treaty to give succour to political refugees. But it must be noted that it has done so many times. The Vietnamese boat people seeking expatriation to third countries was one of the most high profile instances. It is then not a surprise that the government is now working with the UN High Commission for Refugees (UNHCR) to register political refugees in the country. Using the biometric system, it is unlikely that those registered will be "mistreated" again by the authorities. They will also be gradually allowed employment and given access to education for their children as is the case if Malaysia had signed the convention.

This move, to act in a manner befitting a signatory when we are not, is demonstration enough of the government's humane policies. For, it reflects a humanitarian concern deploring the ill-treatment of those who have come here for help. Furthermore, did we not put forward to Australia the so-called "Malaysian Solution" to help stop human trafficking, now scuttled by partisan bickering among their politicians? And, for Malaysians, is this not another sign of transformation and a broadening of our horizons? Sixty years ago and for a long time thereafter, this nation may have had very good reasons to not sign the convention. Now Malaysia is an independent country, industrialised and soon to be a high-income economy, willing and able to take pride of place in the international community. Pleading poverty is no longer acceptable when the refugees already registered with UNHCR number less than a hundred thousand. In a world that is in flux, a contribution like this is testimony of our willingness to become responsible global citizens. New Straits Times, Kuala Lumpur
Posted by Kerry B. Collison at 1:39 PM

Email ThisBlogThis!Share to TwitterShare to FacebookShare to Pinterest
Labels: Recognising refugees in Malaysia