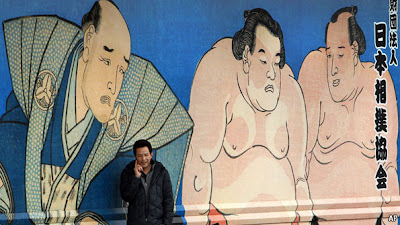 BOUND and gagged, a man dies in the custody of immigration officers while being forcibly deported. The police investigate slowly. Prosecutors mull the case. The wheels of justice barely turn.

Now, it looks like the case will be dropped completely—and a man’s death go unpunished. Prosecutors in Chiba prefecture, where Tokyo’s Narita airport is located, have decided not to indict the ten officers who carried Abubakar Awudu Suraj’s unconscious body onto an Air Egypt flight in March 2010 before he was declared dead, according to a new report in the Yomiuri Shimbun.

Two official autopsies at the time could not determine the cause of death, though Mr Suraj’s widow saw injuries to his face when she identified the body. A new autopsy however purports to reveal that he had suffered heart disease and says the cause of his death was illness.

This is hard to swallow at face value. Three days after the incident an immigration official told Mr Suraj’s widow “It is a sorry thing that we have done.” Officialdom dragged its heels to such a degree that she had to file criminal charges and later civil charges. The kind of gag that was used to restrain him is prohibited, though its use is said to be commonplace.

Mr Suraj was a Ghanaian national who arrived in Japan in 1988, learned the language, worked odd jobs and married a Japanese woman. He was arrested for overstaying his visa and the courts didn’t accept his requests to remain. The March 2010 deportation was the immigration bureau’s second attempt—after Mr Suraj made such a rumpus the first time round that it had to be stopped. So perhaps officers used a bit of extra force to make sure it didn’t fail.

It is an ugly situation. The authorities surely didn’t mean for Mr Suraj to die in custody. But since he did, the people responsible should be held legally accountable. The Chiba prosecutors, by suggesting they may drop the case, look as complicit as the ten officers themselves.

Addendum, 5 November 2011: When The Economist requested an interview with the Chiba prosecutor's office, the answer was a firm no. An employee said that interviews are only allowed for members of the prosecutors' "Kisha Club," the quasi-formal groups that control the flow of news to major Japanese news organisations (and which tend to turn journalists into stenographers for officialdom, by neutering independent reporting). The employee said that the only time The Economist can prosecutors questions is during an annual "press registration"—whose application deadline is long past. Must every Japanese institution be designed to keep out outsiders?
Banyan, The Economist
Posted by Kerry B. Collison at 3:06 PM