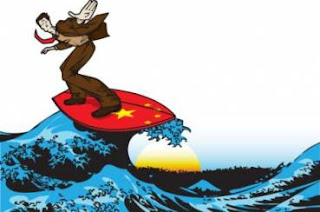 Sloppy reporting is giving the impression that the most recent dispute in the South China Sea between China and Vietnam has been about the Spratly and Paracel islands. Instead, the clash over these islands is in fact an illustration of China’s claim to the whole South China Sea, reaching close to the territorial waters of Vietnam, Malaysia, Brunei and the Philippines.

In the current case, Chinese ships cut the cables of a Vietnamese sonar exploration vessel operating 120 nautical miles off the Vietnam coast approximately due east of Nha Trang. No claim to the area where the Vietnamese ship was drilling could be made on the basis of sovereignty of all or any of the scattered groups of islets, rocks and reefs known as the Spratlys.

Although almost none of the islands and rocks are capable of sustaining human habitation and the seabed is not part of a continental shelf, there is an argument that they could support a claim for a 200-mile exclusive economic zone if it did not conflict with any other 200-mile claim.

The nearest of the Spratlys is at least 180 nautical miles from where the Vietnamese ship was and clearly much closer to the Vietnam coast and on its continental shelf, while the Spratlys lie on the other side of deep water. Likewise, the Vietnamese vessel was well over 200 miles from the closest of the Paracel Islands, the group of sandy islands and banks off the northern coast of Vietnam that were seized by China in 1974, just before the reunification of Vietnam.

The distinction between island claims and sea claims is critical because it also involves the United States. Washington remains neutral on the validity of the competing and overlapping islands claims, but it is adamant about freedom of passage, including through EEZs. The main shipping lane between the Luzon straits and the Singapore straits lies in this area — the deep water between the Vietnam coast and the Spratlys, which is hazardous to large ships. Hence, the United States will in practice always line up against China’s claims to the whole sea and also to China’s narrow interpretation of freedom of passage.

The Chinese action thus should send further warnings to Malaysia, the Philippines, Brunei and Indonesia about the extent of China’s claims over the sea and the resources under its seabed. Existing gas fields off Palawan and Sarawak are already within areas claimed by China on its maps of the sea. The same applies to the huge gas fields, yet to be developed, close to Indonesia’s Natuna islands, even though the islands themselves have not (as yet) been claimed by China.

The Philippines has begun to react against the latest Chinese harassments of its fishermen operating in waters less than 200 miles off the Philippine coast and of an exploration vessel operating near the Reed Bank. The latter lies just 80 nautical miles from Palawan — and nearly 500 from mainland China. There have been calls in Manila for the strengthening of its feeble naval forces. The Philippines is now insisting that the body of water generally known in English as the South China Sea should be known at least locally as the West Philippine Sea. (The sea to the east of the Philippine archipelago is known as the Philippine Sea.)

China simply calls it the South Sea, while Vietnam calls it the East Sea. It was once known as the Cham Sea — after the seafaring, Malay-speaking Hindi kingdom that earlier flourished in central Vietnam. The Philippines also calls the Reed Bank the Recto Bank.

There have been calls in the Philippines for the US to be more supportive of its territorial claims under the terms of its security agreement. There has also been disappointment at US claims of neutrality. The problem for Manila is that however much the United States supports the principles of freedom of navigation and application of the UN Law of the Sea in this case, it never claimed the Spratlys were part of the Philippines while it was the colonial power. France, however, as then ruler of Vietnam, did so — and was challenged by China.

In the past, perceiving the Philippines to be weak, China has often focused its attention on this part of its claim. Its 1995 occupation of Mischief Reef (Panganiban island, Meiji Jiao) 130 miles off the Palawan coast in 1995, allegedly just a shelter for fishermen, was one of China’s more provocative acts. In 2002, there was an agreement with Asean for peaceful resolution of sea disputes, but this only caused a pause in disputes.

Asean’s problem is that some members are reluctant to address the sea issue and China itself will only deal with it on a country-to-country basis, thus weakening such solidarity as Asean members can show. It does not help that Malaysia has been so far let alone by China, and that Kuala Lumpur is keen not to attract Chinese anger by supporting Vietnam and the Philippines openly. To do so might cause Beijing to raise the explosive issue of Malay racial discrimination against its ethic Chinese citizens.

Vietnam is clearly made of sterner stuff, and its new cozy relationship with Washington (and links with Russia and India) are likely to be more effective in dealing with China than is waffling from Asean’s feel-good foreign ministries.

Asia Sentinel
Posted by Kerry B. Collison at 5:03 PM