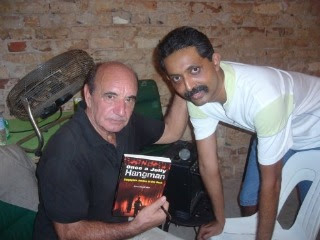 Alan Shadrake, the British author found guilty earlier this month of the charge of "scandalizing the judiciary" by alleging in a book that racial and class disparities exists in the application of Singapore's death penalty, was sentenced Tuesday to six weeks in jail.

The sentencing was met by criticism by an organization calling itself Singaporeans For Democracy, which asked the United Nations to take note of the case and to hold the government accountable during the Universal Periodic Review process later in 2011. In addition, his defense lawyer, M Ravi, said the Member of Parliament from Shadrake's home constituency in the UK will request that the House of Commons condemn the sentence. Shadrake has a week to appeal, but Ravi said Singaporean law doesn't favor Shadrake's chances in the Court of Appeal.

The Singapore High Court fined the author S$20,000 (US$15,375), with the stipulation that Shadrake's confinement was to be extended by two weeks if he did not pay. The presiding judge, Justice Quentin Loh Sze On, also ordered Shadrake to pay the prosecution's expenses of S$55,000(US$42,300).

Upon serving his sentence, Shadrake's troubles may not be over. The Singaporean government is still holding his passport and has not clarified whether it will pursue threatened charges of criminal defamation as well.

Justice Loh possessed wide discretion in determining the sentence. A contempt of court conviction is governed by Rule of Court Order 52, which is silent on the issues of sentence length and fine amount. Into that vacuum, the Singaporean courts have read a broad sentencing power.

"An offence of contempt is punishable with either a fine or imprisonment, and unlike a criminal offence, it is not subject to any limits on the duration of imprisonment or the amount of fine," the High Court ruled in 2006 while imposing a short prison sentence on anti-government activist Dr. Chee Soon Juan.

Only a vague limit of reasonableness curtails the trial judge's sentencing options. "Although it is accepted that imprisonment and fine are two of the permissible sanctions, no limit has been set for either one," the High Court explained in a 2008 contempt ruling against the Asian Wall Street Journal. "Nonetheless, it is clear that the power to punish for contempt of court should be exercised reasonably."

Various media reports which stated that Shadrake faced a maximum possible sentence of two years are incorrect. Two years is the maximum for a person convicted of criminal defamation, the crime with which Shadrake has been threatened but not actually charged.

The judge could have imposed a sentence so light that journalistic interest in the case would have evaporated. A sentence of time served and a nominal fine would have resulted in Shadrake's immediate release while maintaining the Attorney-General's Chambers' curiously consistent winning streak in high-profile political cases.

The most severe possible punishment is based on the charge's special status as a contempt of court. In such cases, a judge has the discretion to imprison a defendant until he has purged himself of contempt -- in other words, recanted. So it would have been within the power of Justice Loh to order Shadrake's imprisonment until Shadrake apologized and repudiated the thesis of his book, Once A Jolly Hangman: Singapore Justice In The Dock.

(Shadrake did apologize, saying it had not been his intention to undermine Singapore's judicial system, after weeks of defiance. Prosecutors immediately said Shadrake's apology was insincere. It didn't appear to help his case.)

While a harsher sentence would have been tin-eared and perhaps counterproductive vis-à-vis the international community, it would have served the purposes of the notoriously thin-skinned and vindictive Singaporean government in squelching internal dissent.

As it happened, the judge chose a middle path, imposing an intermediate sentence which is harsh enough to intimidate locals and Singapore-based foreign correspondents from publicly questioning the independence of the nation's judiciary but is lenient enough that the British government and free press NGOs would not make the case a priority.

With a general election rumored to be in the near future, Shadrake's sentence appears to be perfectly calibrated to vindicate the interests of Singapore's one-party regime.

By Paul Karl Lukacs, practicing media and business attorney, is legal affairs correspondent for Asia Sentinel. He blogs at Nomad Law.
Posted by Kerry B. Collison at 12:56 PM