China's might needs a stronger response from Australia and the US 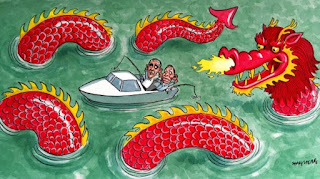 China has aggressively pushed its borders far out into international waters over the past two years by building islands and claiming them as part of China. It's a raw power play that rides roughshod over the claims of four of its neighbours and challenges the regional order.


It's the attempted annexation of one of the world's great commercial lifelines and a central hub of Asia; the South China Sea carries most global shipping, valued at some $US5trillion a year, criss-crossing a resource-rich seabed.


But what happened to the much-ballyhooed Australian-American joint mission to deter such Chinese bellicosity, a mission announced with great fanfare by Barack Obama in Australia's Parliament in 2011?


US Marines through Darwin. More than that, the allies would follow up by hosting growing elements of the US air force and navy at Australian bases. It was Australia's part of the bigger US plan to "pivot" or rebalance to Asia.


"So let there be no doubt," Obama declared in Australia's House of Representatives: "In the Asia-Pacific in the 21st century, the United States of America is all in."


But since then, while China has shocked the region with its rapid expansions, the Australian-American project has proceeded in a desultory fashion. Four years on, the Marines part of the plan is at halfway and some other elements aren't even under discussion.


One of the officials who crafted the initiative says that there has been a failure of political and bureaucratic will in Washington and Canberra to get it done. "It needed firm political leadership," says Peter Jennings, former head of strategy in Australia's Defence Department and now head of a think tank, the Australian Strategic Policy Institute. "But constant leadership change on both sides of politics in Australia has meant that hasn't happened, and that coincides with a second-term Obama administration that has lost its drive," says Jennings.


"The key reason it was done was to give greater assurance, especially to south-east Asia, about the commitment to the region ... the fact that we went as slowly as we did meant less south-east Asian confidence in the US commitment. That's really the backdrop to the failure by ASEAN [the Association of South East Asian States] to respond effectively to China's encroachment into the South China Sea," he says.


What has ASEAN done? The short answer is –  nothing. In reality, China has simply ignored ASEAN and done as it pleased. The Indian strategic analyst Brahma Chellaney calls it China's "creeping invasion".


Beginning in December 2013, two years after the big Obama-Gillard announcement, China started building islands, based on existing rock outcrops and reefs, that encompass 90per cent of the South China Sea.


Since then its large-scale dredging has created about 1200 hectares of new land. Other claimants such as Vietnam and the Philippines have reclaimed land in the disputed areas too over the years.


The difference? Speed and scale. China has reclaimed 17 times more land in 20 months than all the other claimants combined over the past 40 years, according to a Pentagon report issued in August.  In June,  Obama publicly called on China to stop its provocative redrawing of the map. Beijing ignored him.


Media reports emerged at the weekend that that the US Pacific Fleet, belatedly, was about to test China's claims by sailing into the 12 nautical mile perimeter around the claimed Spratly Islands. This will demonstrate that the US does not recognise Chinese sovereignty. Reportedly, this is to happen in the next few days.


Jennings laments the time wasted by Australia and the US. The stepping up of the Marine deployment is occurring at its scheduled pace, but he's unimpressed: "We still don't have 2500 Marines [in Darwin], we have 1150. We could have had 2500 from the day of the announcement." And the other elements, so-called enhanced co-operation between the two air forces and navies, have stalled. Jennings says Canberra and Washington have fallen to arguing over who will pay for necessary military infrastructure to support more US elements in Australia: "We are talking about the low hundreds of millions of dollars, but that's in the context of Australia's $31billion defence budget."


The distracted meandering of the Australia-US effort is symbolic of larger doubts over the US Asia strategy. "Whatever happened to the pivot to Asia?" asks  prominent US commentator Fareed Zakaria.


He quotes Singapore  founder  Lee Kwan Yew: "America will remain the world's dominant power in the 21st century only if it is the dominant Pacific power."


Other elements of the pivot to Asia are under way. The 12-nation Trans-Pacific Partnership, the central economic part of the pivot, is moving to fruition. The plan to increase the share of all US Navy assets committed to the Pacific from 50 to 60per cent is on track too, currently at 58per cent.


But the US Congress, which just this month threatened to again "shut down" the entire US government over an ideological squabble on abortion funding, has other priorities. It's threatening to impose an across the board funding cut next year – the "sequester"- that would harm US defence plans and budgets. China will continue to test Obama's commitment to the freedom of navigation in the Asia-Pacific, and the new Turnbull government is yet to address publicly its strategy for the region. Australian and US ministers are meeting in Boston this week for the annual AUSMIN consultations. If they are serious about the purpose of the alliance in the Asia-Pacific, it's a good opportunity to begin to demonstrate it.