Although it should not be exaggerated, a persistent British naval presence in Southeast Asia should be expected now that commitments to Iraq and Afghanistan have reduced. 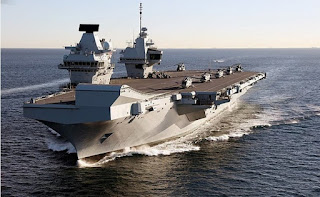 Sparked by recent comments by the British Foreign Secretary, Jeremy Hunt, there has been a good deal of excited speculation about the prospect of a large-scale British military re-appearance in Southeast Asia complete with aircraft carriers and new bases. Its critics argue that this can be simply attributed to the country’s desire to reinvent itself after Brexit. Is there a nostalgic desire to try to return to the days of Empire? In fact, it’s all a bit more complicated than that.


First of all, the United Kingdom’s intention to increase its engagement with Southeast Asia has long preceded the Brexit project (although that has probably accentuated the drive for a ‘global Britain’ that is international by design); and far from being a harking back to the old days is a response to some very modern realities and developments. Chief amongst these is the rate of growth in Southeast Asia and the extent of today’s mutually beneficial linkages between the economies of the UK and the region.


Equally clearly this is not to be part of a plan to compete with, still less contain, China, which is also an important trading partner. It is, however, designed to contribute to the defence of the rules-based order.


This is less of a shift in policy than is often realised. Back in the 1970s the ink had hardly dried on the Wilson Government’s controversial decision to abandon Singapore and its ‘East of Suez’ commitment, than the British naval staff, with Foreign Office approval, set about organising an annual series of ‘group deployments’ through the area and shortly after that established the so-called ‘Beira patrol’.


This was a permanent frigate force off the Gulf which little by little acted as a fore-runner for the substantial task group and semi-permanent mine countermeasures force that distinguished itself in the first Gulf War in the 1990s and afterwards.


When combined with the Five Power Defence Arrangements, the ‘Five Eyes’ relationship especially with Australia and New Zealand, the continuing deployment to Brunei and even the small oiling facility at Sembawang in Singapore, this all makes it seem less a question of the British ‘coming back’ to the region, more a recognition that they never really left.


But certainly the expensive land-centric strategic distractions of Iraq and Afghanistan, together with the effects of great recession of 2008 and the harsh defence review of 2010 did lead to a significant diminution of the British naval presence. A more persistent naval presence in the region is now possible and is being sought.


For this some local logistic support is necessary but nothing like the old Singapore ‘base’ which would be ruinously expensive, politically highly controversial and operationally completely unnecessary. Instead the British, like other navies, not least the Chinese, seek enhanced facilities such as they have completed in Bahrain and just agreed at Duqm in Oman where ships can be refuelled, routine maintenance conducted and crews rested or rotated.


Already with most ambitious deployment for many years of three major assets, including the assault ship HMS Albion and with the Queen Elizabeth likely to make its operational debut in the region by the beginning of 2021, a greater British naval footprint is already emerging.


Moreover such an enhanced presence is likely to be conducted with traditional friends in the area, and this will help too. Relations with the navies of Southeast Asia are good. Moreover both the Australians and the Canadians have chosen the Royal Navy’s highly sophisticated Type 26 frigate for their fleet renewal programmes (and the New Zealanders might follow suit in some form) and this will greatly increase prospects for naval cooperation in the years to come.


The UK’s European partners are likewise interested in working with the Royal Navy, wherever it is, especially in exploring the disciplines of carrier escort, and of course have their own very similar reasons for wanting a presence in the Indo-Pacific region.


Nonetheless there are still major challenges ahead, quite apart from the obvious need to handle local reactions sensitively. The Type 26 programme, the more modest Type 31 frigate programme, the completion of the carrier and F-35b fighter project when added to the very high costs of the Successor ballistic missile firing submarine programme, simultaneously combine into a formidable charge on the UK Defence budget at a time of Brexit-induced uncertainty.


Nor is Southeast Asia the only area in which the UK has an interest it needs to signal. Russian truculence in European waters and the growing importance of the Far North and the Arctic demand a countervailing attention and will remain the top strategic priority. The Mediterranean, the Gulf, the Caribbean and the South Atlantic matter too.


It will be a challenge to meet such a diverse range of commitments with a frigate and destroyer fleet that has dropped from 32 at the time of the 1997/8 Strategic Defence review to just 19 now.


However, it would seem from last year’s relatively benign Modernising Defence Review that something of a renaissance is underway. In all probability, the British will in American revolutionary John Paul Jones’ words ‘be coming’ unless present intentions are derailed by some disastrous Brexit outcome or dramatic strategic deterioration in Europe, but in a cautious and considered way which will depend heavily on the degree of welcome accorded the UK by friends and partners in the region.


This will be measured by the degree of success achieved by the UK’s bid to engage with ASEAN through establishing linkages with ADMM+ and the Expert Working groups. The probable increase in the visibility of the Royal Navy in Southeast Asian waters after all is just one fairly small part of a much bigger package of political and economic efforts to engage with the region.


*Professor Geoffrey Till is an Advisor to the Maritime Security Programme at the S. Rajaratnam School of International Studies (RSIS), Nanyang Technological University (NTU), Singapore.