When voters discovered that the objectionable little boy, Roy (who previously flummed the seat of Longman) had assisted Turnbull and the Stick Insect to knife Tony Abbott, they threw him out. They are not stupid. Therefore what should the message be for other suicidal Turnbull supporters?


They too are due to be slaughtered at the next Federal election and their seats handed to Shorten without so much as a whimper!


Peter Dutton, currently in the marginal seat of Dickson, adjacent to Longman, now has a life or death decision to make at the next joint Party Room meeting. He needs to challenge Turnbull… his hat should be flung on the floor along with Abbott’s, Kelly’s and Jim Molan’s (yes, a senator can chuck his hat in the ring). So too can Barnaby Joyce, but he will only be trying to talk sense to Liberal boneheads as he needs the Nats to reinstate him over the useless Michael McCormack first.


Peter Dutton, a fair dinkum Conservative, would win that contest, Turnbull would resign and again attempt to join the Labor Party. Once again Labor would reject him as a self-centred invertebrate. 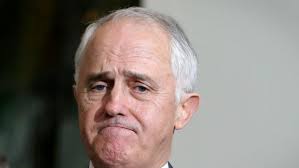 
He will then be confined to speaking at Lions' Club dinners where he would be free to wallow in his own bullshit in exchange for a few unconvincing hand claps.


Immediately on top of the Coalition’s “to do” list would then be to walk away from Paris, no, run like hell away from it, as other more sensible nations are doing, and slash immigration to a sustainable level with an emphasis on merit-based non Muslims.


Dutton would then can Turnbull’s stupid Snowy 2.0 nonsense and revisit Abbott’s plan to open up the north before China does, damming rivers and redirecting the Stick Insect’s donations of millions to Indonesia’s farmers back to Australian farmers as grants rather than loans.


Dutton would then set about doing the stacks of stuff that Abbott should have done.


To put the current political scene in context; voters detest Shorten, but Conservative voters detest Turnbull even more! The Liberal Party will die if it stays glued to the lunatic Left, just as Fairfax did.


So don’t argue with voters, just do it!
Withdraw from the Paris Agreement!
Build coal fired power plants across Australia
Stop subsidies on renewable energy


Four-time Walkley Award winning political commentator and Churchill Fellow, has returned to the fray over concern that the integrity of news dissemination is continually being threatened by a partisan media.
Posted by Kerry B. Collison at 2:44 PM