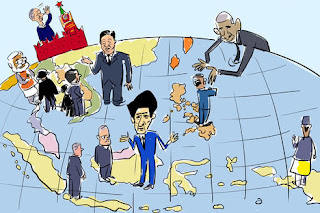 
In December, two Russian strategic bombers made an unusual flight to the Indonesian airbase on Biak in the province of Papua, where they conducted an air alert drill. Across the Arafura Sea in Darwin, Royal Australian Air Force squadrons went into a state of heightened alert.

To the extent there is a Russian challenge to the liberal order in Southeast Asia, it is most likely to make progress in the information space.


Then, the unarmed bombers flew home.

A number of analysts have raised the alarm on Russia’s more pronounced presence in the Asia-Pacific. Russia’s capabilities upgrade to the Pacific fleet, continued efforts to increase arms sales, and token deployments such as those to Biak of the Tu-95 Bear bombers catch Canberra’s attention.


But there is little evidence to suggest that Russia’s ambitions run beyond arms sales and occasional harassment of the US and its allies. Russia is still primarily focused on Europe and the US, and too much attention paid to Russia’s defence engagement in the region can distort policy – as US Secretary of Defense James Mattis has argued Congressional sanctions on Russian arms sales to Vietnam and Indonesia would do.


There is a risk, moreover, that a focus on military deployments and arms sales will divert attention from the information space, where Russia poses a credible challenge.


Sputnik and RT: agents of distrust


Since 2017, the Kremlin’s disinformation apparatus has ratcheted up its operations in Southeast Asia. In a region where illiberal tendencies run deep, the expansion of an effort notorious for undermining trust in independent institutions, such as international news agencies, should be a matter of grave concern.


Take Malaysia’s official news agency, Bernama. In December 2017, Bernama signed a memorandum of understanding on news exchange with Sputnik, a Kremlin-funded media outlet. The deal was struck by Malaysia’s previous government, which had been badly damaged by the Wall Street Journal’s reporting on corruption at the 1MDB sovereign wealth fund.


As the government sought to cast doubt on the allegations by criminalising discussion of them in a controversial new “fake news” law, Bernama praised Sputnik, a world leader in sowing doubt about the credibility of reports in Western media. Their partnership, Bernama’s editor-in-chief said, would provide a “wider variety of news” – a variety which it is safe to assume would not have included stories on the alleged corruption at 1MDB.


Sputnik and its sister organisation, the Russian television and digital outlet RT, deny being agents of disinformation, and argue that their reporting merely challenges the “Anglo-American mainstream” media by providing alternative views. But while both lean on mostly straightforward news coverage to provide a patina of credibility, their editorial, analysis, and commentary narrate and reinforce one story: Western decline, Western imperialism, and conspiracy theories connected to Western funding.


While RT relies on highly emotive op-eds, Sputnik’s approach is subtler and more insidious. Its editorials include analyses that might seem plausible to a reader without much background knowledge, but which are unsupported by facts. Consider Sputnik’s commentary on the Rohingya crisis, which the outlet’s contributors argued last year (here, here, and here) was either a plot to seize Myanmar’s oil or the product of George Soros’s efforts to destabilise the country. Such arguments validated a desire in Myanmar to evade responsibility for atrocities committed in Rakhine State and widely reported by mainstream news organisations.


Russia is not only exporting illiberal content, but also its experience in producing it. In late 2017, Russian Prime Minister Dmitry Medvedev and Philippine President Rodrigo Duterte signed a deal for cooperation in the field of “state information dissemination”. Under the agreement, Duterte’s communications staffers would travel to Russia for training. Critics of Duterte, such as Rappler’s Maria Ressa, have cautioned against this move, citing Russia’s known use of disinformation tactics and patriotic trolls.


Russia does not need to dominate the information space in Southeast Asia; it just needs to do enough damage through its media properties and those of similarly minded Southeast Asian governments to erode confidence in mainstream news organisations, advocacy groups, and other independent institutions. As it does so, authoritarian leaders and corrupt officials are less likely to be made to answer for abuses of public trust.


A free and independent press is not often spoken of as one of the institutions of the liberal international order, but can such an order operate without it? To the extent there is a Russian challenge to the liberal order in Southeast Asia, it is most likely to make progress in the information space.


Canberra should meet this challenge by making more meaningful contributions to supporting a free press in the region. Long-running media exchanges facilitated by the Department of Foreign Affairs and Trade and the Walkley Foundation are a start, but could be much more robust with greater funding. Instead of whirlwind, five-day tours of Australian institutions, what about placing someone from the Irrawaddy in a Fairfax newsroom for a year, or someone from ABS-CBN in a position in the ABC’s Parliament House bureau?


It may also be time to explore cooperation with likeminded countries, such as Japan, for support of an Australian or multinational public broadcaster in the region. If its Southeast Asia operations were resourced properly and run with appropriate levels of probity and cultural sensitivity, the ABC – like the BBC throughout Africa – could become the media organisation that partisans of every stripe turn to when they want to hear dispassionate, fact-based reporting and analysis on events in their own region.


When Russian bombers approached Australian airspace last year, Canberra was prepared to respond. Yet Russia’s presence in the information space of the region is established and growing, even as the Australian Government cuts funding for overseas broadcasting and independent news organisations retrench.


A rethink is required. Without it, Australia may find it is dealing with a much more illiberal region in the years to come.