Was the Indonesian Military Chief’s US Flight Incident a Political Stunt? Irrespective of what actually occurred, the incident holds significance for the country’s domestic politics 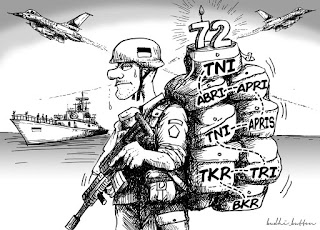 Was the Indonesian Military Chief’s US Flight Incident a Political Stunt? Irrespective of what actually occurred, the incident holds significance for the country’s domestic politics


For months, Gatot Nurmantyo, the Indonesian military chief, has been courted self-aggrandizing controversy wherever he may find it, all designed, it seems, to make himself more politically important than he is.


The latest instance came when Nurmantyo was booked to fly to Washington to attend a counterterrorism conference. He was reportedly invited by Joseph F. Dunford Jr., chairman of the U.S. Joint Chiefs of Staff, who happens to be a personal friend, according to Nurmantyo. Before departing, however, he was told U.S. Customs would deny his entry – along with his wife and four other officials – and was not allowed to fly. American officials quickly offered apologies for what the U.S. embassy in Jakarta said, on Wednesday, was due to an administrative error.


Days after the incident, however, it emerged, following a statement by the U.S. Department of Homeland Affairs, that despite the initial flight ban, Nurmantyo was quickly cleared to travel and booked onto another airplane leaving hours after the original one. (He had also been warned before the original flights that there might be some delays because of U.S. security protocols.)


But Nurmantyo “chose not to travel” on the second flight, the statement says. Nurmantyo, also speaking days after the incident, insinuated that he didn’t board the second flight because he wasn’t ordered to. “Without [the order of the president] I will not take any initiative,” he said. One doubts, though, whether President Joko Widodo would’ve been too fussed over which airplane Nurmantyo boarded.


Irrespective of what actually occurred, he whole incident has also allowed nationalists of all hues to obtrude into the incident. The Jakarta Post sensationally described it in an editorial as a “diplomatic scandal.” If it is a scandal then it is one enflamed by politicians and the press, which have given it copious coverage, especially on Indonesian television.


The aforementioned Jakarta Post editorial suggested that “such carelessness of the U.S. government may result in fallout in bilateral and defense military ties,” while it added that the Nurmantyo flying schedule “still leave[s] us agog at how the world’s biggest power could be so reckless”. But the fact that U.S. Defense Secretary James Mattis got involved and personally apologized to his Indonesian counterpart shows America as more contrite than punitive. However, so far, Washington has refused to say publicly whether there was anything more to the incident than a simple error.


Though details remain murky, incidents like these and the way they are frame matter because of Nurmantyo’s role in Indonesia. Nurmantyo personifies the genuine concern that military leaders are becoming more influential in Indonesian politics. And it is abundantly clear that Nurmantyo has long seen his future in politics and is now making a play given that he is due to retire in a few months’ time.


As early as 2014, Damien Kingsbury, of Deakin University, wrote in the East Asia Forum that “Nurmantyo’s breaking of over a decade of military silence on domestic politics signals a potential alternative to Indonesia’s democratic path.” To put this into context, Kingsbury added: “Democracy in developing states tends to be vulnerable to reversal, particularly where the military remains primarily focused on internal rather than external threats”.


Nurmantyo is certainly no friend of democracy. Years ago, he described democracy in Indonesia as “empty.” More recently, he has threatened to disturb the peaceful balance between different security forces when he said that the military could take action over the import of foreign-made weaponry. In a speech to retired military officers last month, which was leaked to the media, he said that he was prepared to “attack” the police if they were given such weapons.  He has also been making repeated warnings about the return of the PKI, the Communist Party of Indonesia, almost an irredentist pursuit by Nurmantyo.


Bhatara Ibnu Reza, a senior researcher for Imparsial, the Indonesian Human Rights Monitor, dubbed Nurmantyo a “political soldier” and the “enemy of democracy” in a recent opinion piece for the Jakarta Post.  John McBeth, writing in the Asia Times this month, said that Nurmantyo is a “one of a kind”, a remark that sought to distinguish him from his military chief predecessor, Moeldoko, who’s political ambitions have so far fallen flat; Moeldoko is only deputy chairman of the People’s Conscience Party (Hanura).


“Not since the birth of the democratic era has an Indonesian military commander” – meaning Nurmantyo – “so blatantly displayed his political ambitions while still in office. And never before has one so openly courted religious groups in the hope of burnishing his electability,” McBeth wrote.


Though Nurmantyo might not yet be a popular figure he may seek to be, the latest incident will no doubt boost his profile. That matters because the ideology he represents is gaining traction in Indonesia. What Nurmantyo calls for is the rejuvenation of ethno-nationalism, tinged with religious exceptionalism, and combined with a populist appeal to the classes brushed aside by economic development: the sort of message that has been propagated by the radical Islamic Defenders’ Front (FPI).


The comparison isn’t trite. When giving a lecture in December, following Basuki “Ahok” Purnama’s conviction for blasphemy, he said that the protests, led by the FPI, against the then-Jakarta mayor came from the “hearts of the Islamic community”.  He also mentioned that he had spoken to Habib Rezieq Shihab, the FPI’s leader.


Some analysts think Nurmantyo aspires to become the running mate of Prabowo Subianto in 2019’s presidential election. “His character and leadership are already proven,” the deputy chairman of the Great Indonesia Movement Party (Gerindra) told local media last month. All the more reason, then, to read the Nurmantyo flight incident more as a political stunt rather than some sort of elaborate plot by Washington to shame Jakarta or a crisis in U.S.-Indonesia relations.


The Diplomat
Posted by Kerry B. Collison at 3:57 PM