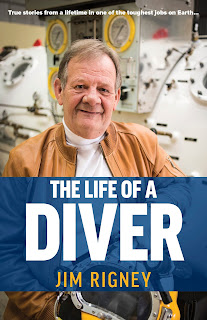 
Jim Rigney has been a commercial diver since the age of seventeen. Starting as a harbour diver in northern Tasmania, Jim has gone on to forge a long and extensive career within the offshore diving industry, taking him all over the world as an air diver, saturation bell diver, medical technician and diving superintendent.


Life of a Diver is a collection of Jim’s experiences and observations from a lifetime within the commercial diving industry, both in Australia and abroad. It’s the life of a diver who worked on the salvage and survey following the 1975 Tasman Bridge disaster; who made it a personal mission to establish Australia’s first saturation diving training facility in the 1990s; and who once wanted to teach an ill-behaved crew member a lesson and inadvertently created an Internet viral hit in the process.


Jim also shares his insights from over forty-five years in a tough but rewarding industry, and how he has navigated the day to day challenges that come with off-shore work — and what improvements can still be made.


The life of a diver such as Jim Rigney is one of adventure, danger and the search for stimulating work and innovation.


Rigney was born in Burnie, Tasmania in 1953. He commenced his career as a commercial diver at the age of seventeen, following a year working in the underground mines on Tasmania’s west coast so as to finance his diver training and purchase the necessary equipment.


Jim progressed from harbor diving and commenced abalone diving in Tasmania in 1972 but became increasingly frustrated with the tedium that abalone diving had to offer, compared to the challenges of the subsea construction industry.