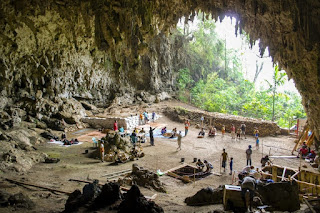 Researchers from Australia's University of Wollongong have recently uncovered the fossilized remains of ancient hominins in Liang Bua, Flores, East Nusa Tenggara, which appear to be the ancestors of the tiny human species Homo florensiensis, discovered there more than a decade ago. (Reuters Photo/Liang Bua Team)


Researchers from Australia's University of Wollongong have recently uncovered the fossilized remains of ancient hominins in Liang Bua, Flores, East Nusa Tenggara, which appear to be the ancestors of the tiny human species Homo florensiensis, discovered there more than a decade ago. 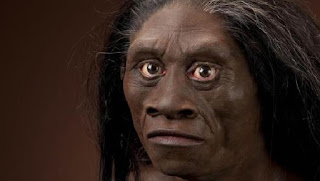 Dr Gert van den Bergh from the University of Wollongong's Center for Archaeological Science, led the team that excavated the remains from layers of sedimentary rock at a site on Flores Island. The remains include a lower right jaw fragment and six teeth from at least one adult and two juveniles.


Van den Bergh said the entire team was surprised at the size of the adult jawbone.


"We expected to find something larger, something closer to the original founder population of Homo erectus, but they were just as small, if not smaller, than the Homo floresiensis," the researcher said.


Remains of the 1-meter-tall Homo florensiensis, affectionately dubbed the "Hobbit," were discovered in a cave on the island 12 years ago. Not only are the fossils and stone tools from the most recent discovery clearly belonging to the hobbit's ancestors, they are also strikingly similar to those found in 2004, which provides new insights into the origins of the species.


Some scientists speculate that Homo florensiensis may have shrank due to insular dwarfism, an evolutionary process that results in a species reducing in size after being isolated on a small island for a long time with little access to resources.


However, researchers were taken aback by the size of the most recently discovered fossils, found to be about 700,000 years old, as they indicate that the ancestors Homo florensiensis were tiny to begin with.


It has been theorized that normal-sized Homo erectus from Java migrated to Flores more than a million years ago, but scientists are still unsure of how they got there.


The early human species would be too primitive to build boats, and swimming would be not have been an option.


Some researchers, however, speculate that they have been swept across by a giant tidal wave.


On the other hand, professor Chris Stringer of London's Natural History Museum hypothesized that the ancestors may have migrated from Sulawesi, although he still has no evidence to prove his hypothesis.


Meanwhile, Dr Adam Brum of Australia's Griffiths University hopes that he and the research team will gather more remains to complete the puzzle.


A research paper titled "Age and Context of the Oldest Known Hominin Fossils From Flores" was published in the international science journal Nature on Wednesday (08/06).


When Homo floresiensis was first classified as a new species in 2004, scientists were stunned because it suggested that these tiny hominins existed well after modern human had evolved. Only three other early human species are believed to have had interaction with modern humans.


The research team back then compared the hominin's skull, face, teeth, and limb bones to the Rampasasa pygmies, who currently live on Flores. According to the analysis, the hobbits and Rampasasa pygmies share many features.


However, the results of a study led by Robert Martin of the Field Museum of Chicago published in the journal Science in May 2006, concluded that the "hobbits" were diseased modern humans, not a new species.  By : Ratri M. Siniwi