With Indonesian Hard-Liners Increasingly Cornered, All That Is Needed Is a Little More Rope 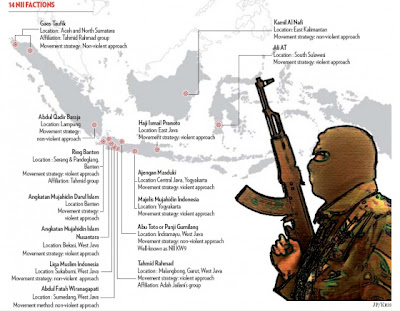 As calls for the disbandment of organizations that use religion as a mask to justify their violent actions subside, the very same groups have consolidated in the capital to produce ever more violent rhetoric.

Although violent statements coming from the leadership of the Islamic Defenders Front are nothing new, the recent calls against the Liberal Islam Network are even more disturbing than the call by the Front’s Sobri Lubis to kill Ahmadiyah followers in February 2008.

If four years ago Lubis urged people to “Kill, kill, kill Ahmadiyah,” in a recent gathering, the preferred method of killing was specified: hunt down and burn authors of liberal Islam books. In the same gathering, a spokesman for the Front known as the FPI, Munarman, also called for people to “hunt down ‘liberals’ in their neighborhoods, to beat on their doors and expel them.”

In a separate occasion, these same people called for millions to gather in front of the Presidential Palace at the end of this month, camp there and stay until President Susilo Bambang Yudhoyono was ousted by popular pressure. This effort to redefine their movement of violence in the name of Islam as an anti-Yudhoyono popular movement is a sign that the vigilantes are losing ground. They want people to forget that they are merely jobless thugs in robes by jumping on the bandwagon of criticism against the president, to seek protection in the predicted protests in the wake of the hikes in the price of petrol.

The bravado of violent organizations in Indonesia can be explained by examining their ties to the police and the military. Many of us still remember back in the beginning of the Reformasi era at the turn of the century, when military and police chiefs in Jakarta organized vigilante groups to beat up student demonstrators.

The logic behind this move was that the police and military could no longer beat up students themselves because of widespread condemnation of human rights abuses. This necessitated the formation of a proxy group to do the dirty work for the powers that be. When the police or the military crack down on peaceful demonstrators, it creates an international outcry and the authorities are accused (rightly so) of human rights abuses. However, if a group disguised as a civil society organization commits the violence, it is merely “horizontal conflict” within society, and the powers that be are safe from such accusations.

For years the FPI enjoyed the often open support of the police and (according to WikiLeaks) the intelligence service while it continued to grow. However, recently there have been signs that this support has been partially or fully withdrawn, and with popular resentment mounting, these groups are feeling cornered. They know that when reason is once more enshrined in governance, violent groups will surely be held accountable for their actions. When this happens, their sponsors and backers will also be held responsible for their political adventurism. This explains their recent concerted effort to call for a revolution to begin at the end of this month.

Several months ago, Al Jazeera aired a program, complete with interviews with the parties concerned, explaining the support that several retired generals had given to these violent groups. Obviously these generals have no patriotism, for they care not that by creating and supporting violent religious groups they are treacherously destroying the pluralistic foundations of our country. They are also obviously cruelly blinded by their lust for power and have in their hearts the callousness needed to be able to play the religious card and pitch the poor, uneducated masses against each other, even though they risk massive bloodletting by doing so.

The participation of the transnational Islamist organization Hizbut Tahrir in the building of the mass power of the Islamist groups here means that they have most likely adopted a Leninist strategy to seize power once a revolutionary situation has manifested. HT has adopted Lenin’s advice of the strategic use of a vanguard party that need not be big as long as it is militant and has a simple and uniting slogan, for when a country is in a revolutionary situation, whoever raises a strong slogan with confidence will win the day.

The Bolsheviks proved Lenin right in the early 20th century in Russia, and the Islamists want to employ his tactics in Jakarta, with the simple slogan of “Shariah and Caliphate.” All they need now is for a revolutionary situation to manifest itself. They are betting all they have on amplifying the discontent created by the planned hike in the price of petrol to set the stage for their victory.

The good news is that these Islamist adventurists have grossly miscalculated on two counts. Firstly, they miscalculate the support they have from the majority of Indonesian citizens and Muslims in particular. Most Indonesian Muslims are aware that these thugs are not really struggling for the advancement of Islam and Muslims. Their actions and rhetoric are far from Islamic values, and most Muslims see through the masks of religiosity these thugs wear.

The three people the Islamists are putting forward to lead the nation once their Islamic Revolution is successful are particularly repulsive to the man on the street. Abu Bakar Bashir is a convicted terrorist, Riziq Shihab is an ex-convict and Abu Jibril is a firebrand cleric. No way in a thousand years will Indonesians accept the leadership of these men.

The second mistake of the Islamist adventurists is thinking that a revolution of the kind Lenin was counting on will happen just because the price of petrol goes up: it will not. Instead, it will encourage them to commit more slander and libel, spout more hate speech and incitement to murder, which hopefully will be enough reason for the authorities to clamp down hard and bring their whole criminal network to justice. For now, they need to be given enough rope to hang themselves.

Email ThisBlogThis!Share to TwitterShare to FacebookShare to Pinterest
Labels: All That Is Needed Is a Little More Rope, With Indonesian Hard-Liners Increasingly Cornered