The Bendigo Bank fiasco all started when a group of Bendigo citizens heard about plans to build a huge new mosque in their city. Knowing that a mosque would bring untold trouble, as they had seen happen in other places where mosques were built, they decided to get together and work out ways to oppose the development application 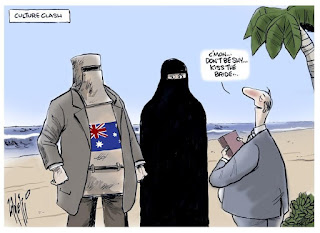 This is how you start to establish a "no go zone" for Australian's IN Australia, the kind that they have in Britain and France. Local politicians (and these are the lowest flying intellectuals) keep selling the nation out for a fist full of Islamic votes.

This behaviour is the thin edge of the wedge to establish Sharia law in Oz.

The Bendigo Bank fiasco all started when a group of Bendigo citizens heard about plans to build a huge new mosque in their city. Knowing that a mosque would bring untold trouble, as they had seen happen in other places where mosques were built, they decided to get together and work out ways to oppose the development application.

They formed the Concerned Citizens of Bendigo <http://concit.org/>  group and opened a bank account to deposit donations they planned to raise from other concerned citizens.

But they soon found out that the Bendigo Bank is in bed with the Muslims. As opposition to the mosque grew the bank took it upon themselves to censor the protestors. The bank closed the Concerned Citizens account, stating that it did not meet the “Bank’s Community Standards”. This certainly raised a few eyebrows, because the Bendigo Bank markets itself as a Community Bank!

When news of the account closure got out over Facebook it created a huge backlash against the bank. To date, depositors have closed their accounts to the tune of at least $60 million, and many investors have divested themselves of their stock in the bank. The drain has not ended yet. In fact, it is likely to continue for the foreseeable future.

Meanwhile, the bank has stood firm on its decision, claiming the moral high ground. What a shame they can’t understand that We the People can see right through the sham.

In an effort to counter the bad publicity that its actions caused the Bank put up a statement on its Facebook Page:

“In response to recent questions and commentary regarding our decision to close an account. This was a considered decision by our Bank, and we respect everyone’s right to voice their opinions. Equally we have a right to ours, and we want to do business with organisations whose values align with our own. Our Bank values tolerance and inclusiveness, qualities which are an important part of a strong community. This is the only comment we will be making here on this matter. ^Jeanette”

This only served to upset even more people. They flocked to the Stop the Bendigo Mosque Facebook page to voice their displeasure. They also vented their anger on the Bendigo Bank page where some of the comments were, shall we say, less than pleasant.

The account closure prompted the members of the Concerned Citizens group to start digging into the reasons behind it. Working to the old maxim, “follow the money” they soon started to yield results.

While they were digging into the Bendigo Bank’s motives the Concerned Citizens group was not giving up. They approached National Australia Bank (NAB), only to find that the bank declined to open a bank account for them. Not surprising really, as the group quickly learned that NAB is a major shareholder in the Bendigo Bank through its wholly owned subsidiary National Nominees.

So Con cerned Citizens went to the Commonwealth Bank. To their surprise they found that the CBA also refused to open an account for them as did Bank Macquarie, and Westpac —all claiming a values clash.

Finally their accountant offered Concerned Citizens the use of one of his accounts at the Macquarie Bank. But their joy was short lived. They quickly found that this account was closed as well and the accountant also lost his standing with that bank as a result. Their first inkling came when they tried to log into the online banking facility only to find that there was no account to log into. When their accountant asked the bank what had happened they told him they had closed the account. However, they did promise that they would mail him the cheque for the missing money.

A supporter has revealed that the Macquarie is handling the sale of the Rural Finance Corporation for the State of Victoria, and that the Bendigo Bank is the only buyer in a no tender no public offering tender sale.

The Bendigo Bank started the ball rolling that has sparked a chain-reaction throughout the banking system. Now, all the banks have closed ranks to protect themsel ves against We the People, not understanding that we have the power to stop them dead in their tracks and uncover every bit of dirt on them there is. They have prodded the tiger and now we are baring our teeth.

Not surprisingly, the Politicians will only side with the perceived winners, and to date that has been the Banks. However, this is likely to change. We the People are uniting as the murky facts in this distasteful drama are pealed back, layer by stinking layer.

Mike Hirst, the Bendigo Bank’s CEO, tried to explain to Kent Baylay of the Gold Coast Sentinel in an “off the record” interview that was later uploaded to the internet that the bank made a morally based decision against a group they considered a bunch of racists.

Mike Hirst didn’t let the facts get in the way of his attempted whitewash. Like just about everything that come out of his mouth he appeared less than truthful, to use the words of Dr. Alexander Douglas MP.

Dr. Douglas deserves the title The Honourable Member for Gaven in Queensland for his revelations on the Alan Jones radio show exposing the extent of the corruption within the banking and political systems of Australia.

As a result of h is revelations the true facts are emerging and we are connecting the dots. The Bendigo Bank has been lying through its collective teeth…and then some.

It transpires that the property that surrounds the intended site of the Mosque in Bendigo is actually owned by a company controlled by an ex-Director of the Bendigo Bank and Chairman of Bendigo Telco. Mr. Don Erskine with his son Mark are involved in the Brickworks development.

At first glance, it looks like closing the Concerned Citizens account was just a favour done by Mike Hirst and the Board of Directors of the Bendigo Bank for an old friend. Obviously, they wanted to silence any opposition. After all, wha t is the small matter of closing a customer’s bank account when weighed against a $4 Million wi ndfall?
Bend Over Bendigo Bank, the dhimmi bank

Next, the Concerned Citizens found out that the Bendigo City Council is about to sit in Chambers to discuss re-zoning all that land to high density residential.

The land owner and his partners stand to make a SUBSTANTIAL capital gain out of that deal. No wonder this mosque application has generated so much controversy.

Once the mosque is built hundreds, if not thousands more Muslims will move into the area. They will want somewhere to live: And where better than right next door to the mosque?
Perhaps this explains why the mosque application proposes such a LARGE facility. It’s not just for the few dozen Muslims living in Bendigo today. They are planning on building up a substantial Islamic presence there.

What does this mean for the local residents?

Well, as we have already seen, if your business or group dares go against the plans of this mob you will be targeted, just as the Concerned Citizens Group were, and told to take your business elsewhere. Of course, they will make sure that it is just as impossible to open a new= business or bank account, as the Concerned Citizens Group has. Since being rejected by the Bendigo Bank they have been unable to open a new account at any bank in Bendigo! <http://www.restoreaustralia.org.au/wp-content/uploads/2014/04/BendigoMosque.gif>

The consequences, if the mosque is approved, will be catastrophic for any Australian businesses currently operating in the area. They will soon find that they are targeted by the Muslims in a concerted effort to move them out so that Muslims can move in. This will happen in a number of ways. Businesses will be broken into, people will be attacked, rubbish will be dumped outside their doors, windows broken, cars parked to block access.

If you think this is an over-reaction you only have to look at what has happened in other western countries. This is a standard practice wherever a mosque is built. Residents are forced to move and if they refuse their lives are made such hell that in the end they are happy to move even if they lose money selling their property. In some cases, people are killed.

As more Muslims move into the area traffic problems will increase. Crime will become rampant…Muslims are not exactly always law abiding citizens. They put their Islamic sharia law before any western laws. Their loyalty is not to the country they live in but to Islam and sharia law.

Noise pollution will become a burd en on all residents. The call to prayer will be blasted out of loudspeakers from the mosque from early morning to late in the evening.

But all this is in the future.

The biggest worry for Bendigo residents today is the impending City Council meeting to approve the application to re-zone that all important land around the proposed mosque. If this happens then there will be no stopping the mosque or the subsequent destruction of the peace and tranquillity of Bendigo.

Is this what Bendigo residents want?

We are calling on all concerned citizens to attend that City Council meeting and make sure that their objections are heard, loudly. (All objectors will be notified or inboxed through the Stop the Mosque Facebook page to attend.)
Posted by Kerry B. Collison at 9:25 PM