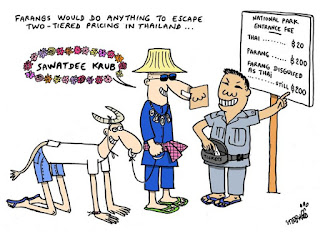 With entrance fees now more expensive in Thailand's national parks, we ask whether it is fair to charge international tourists higher prices


It can be one of the most frustrating elements of travel. You arrive at a historical site or museum in an exotic corner of the planet to discover that, not only do you have to join a queue to enter the attraction of your choosing – but you also have to pay more than many of the people around you to do so. 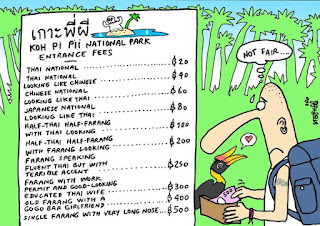 (If we did this in Australia the Thais would accuse us of being racist no doubt!)


The thorny issue of whether international holidaymakers should be charged more than residents has been raised again this month thanks to a series of price increases across the national park network in Thailand.


While some of these fee increases – which came into force at the start of February – have affected all park visitors, they have also served to highlight the gulf between the amounts paid by foreigners to see some of the country’s natural jewels, and those applied to locals.


Mu Ko Similan, for example – one of the prime dive sites for those staying in Phuket – has upped its international-tourist fee from 400 Thai Baht (£8) to THB500 (£10), while the charge for Thai nationals has been raised from THB80 (£1.50) to THB100 (£2). These figures have been mirrored at the Mu Ko Surin Marine National Park.


In all, 31 Thai parks have boosted their entry charges, with the biggest increases borne by visitors from overseas.


The standard justification for two-tier costing is that foreign visitors are being charged at the market cost for admission to an important landmark, while locals are allowed a reduction on account of being taxpayers whose wages have already contributed to the site’s upkeep. When the attraction is a place of worship, a temple perhaps, it is also quite unreasonable to charge locals a fee to enter somewhere they might want to visit frequently.


A second argument might be that the costs of running a national park are sizeable, and that higher fees for international tourists help to fund this – while permitting residents to enjoy the best of their own country at a rate that is not prohibitive.


Certainly, Thailand is not the only country where price differences such as these are visible. A one-day pass to take in the temples of Cambodia’s prime attraction – Angkor Archaeological Park – will set you back US$20 (£13) if you hold a European passport, but precisely nothing if you live down the road in Siem Reap.


Many attractions in the Caribbean also employ this slanted costing model. To pick an utterly random location, Harrison’s Cave – an appealing if unremarkable subterranean warren in western Barbados – asks 60 Barbadian Dollars (£19.50) of overseas tourists, but BD$50 (£16) of islanders.


My instinct is that, in countries where the income gap between hosts and guests is not so much a fraction as a chasm, then yes, asking foreign visitors to pay a little more to subsidise the system is not an unfair demand. The average salary in Cambodia is around US$750 (£485) – undoubtedly less than the amount it costs every European or American visitor to travel to this fragile, war-damaged corner of the Far East. And having spent a blissful day at Angkor Wat in the recent past, I would also suggest that £13 to glimpse one of the true wonders of the world is very much a bargain.


The question of advantages being taken maybe comes to the fore in places where there is less of a wage canyon between visitors and residents. Such as, say, Russia – a nation not short of a few pennies, but not averse to wrangling a few more of them from international tourists. Head to St Petersburg – not a city known for its lack of opulence – this summer, and you will find that, as a non-Russian, you will have to pay a little extra to wander its most prominent attraction.


The Hermitage – by many definitions the finest art gallery on the planet, if the Louvre will excuse the statement – sets its fee for overseas tourists at 400 Roubles (£4.10) and its ticket price for Russians and Belorussians at R350 (£3.50). Not an enormous difference per person, but one which, when repeated across the many vast cruise ships which pause in St Petersburg, soon adds up. The magnificent Peterhof Palace, just outside the city, plays the same card – R550 (£5.60) up against R400 (£4.10).


Do such situations make you feel like a cash cow? Some might say that charging more for tourist attractions might lead to some visitors being put off going entirely.


Or is travel an expensive business – especially if you want to explore the globe’s most exciting sites – where such small extras are expected overheads? By Chris Leadbeater
Posted by Kerry B. Collison at 4:17 PM