How to Stop the Rot in Orangutan Protection 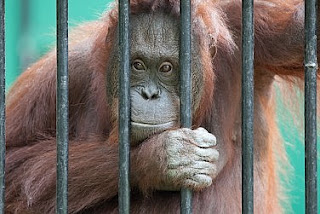 A baby orangutan held by a resident of West Kalimantan's Kubu Raya district, where the animal was found. (Antara Photo/Jessica Hel
With some 10,000 orangutans having died a premature death in the past five years, there clearly has been collective failure by governmental and non-governmental organizations to implement effective conservation management for these species.


Sumatran orangutans have been Critically Endangered for a while, indicating severe population declines in the recent past and projecting similar declines in the near future.


Bornean orangutans were slightly better off, so we thought. But based on the first robust population trend analysis, recently conducted for Sabah, Malaysian Borneo, indicating a 25 percent decline in 10 years, this species is also likely to be listed as Critically Endangered.


The facts speak for themselves. Based on extensive community interviews, some 1,500-2,200 orangutans are killed in Kalimantan annually. We further estimate that we are losing some 3,000-6,000 square kilometers of habitat every year on Borneo, and this similarly translates in the loss of several thousand animals. These dead orangutans are real, not the fiction of some science crackpots!


The Indonesian government officially concurs with the above findings and thus recognizes that there has been little if any progress on its own goal of stabilizing all wild orangutan populations by 2017. Last year's Laporan Kinerja of the Directorate General of Forest Protection and Nature Conservation (PHKA), the Indonesian conservation authority, indicates that in the nine sites where the government is monitoring Bornean orangutans, there have been average population declines of 26.5 percent and 28.2 percent in 2013 and 2014 respectively. If accurate, this indicates the orangutans are miles away from population stability, and rapidly heading towards extinction.


How is it possible that after nearly five decades of hard conservation action we are still largely failing to achieve results? Let me summarize a few reasons.


First, with more than 75 percent of orangutans living outside protected areas where forest is rapidly being converted to non-forest, orangutan conservation is obviously challenging.


Second, there is a lack of funding. In a recent report I calculated that the total allocated funding for orangutan conservation in Kalimantan was about $20 million. Half of this was through government budgets for protected areas, provincial conservation agencies, and national-level coordination, and the remainder came from the NGO sector. About $5 million is spent by NGOs in Kalimantan on activities related to orangutan rescue, rehabilitation and reintroduction, and the remainder on habitat protection and law enforcement.


In simple words this means that we should either significantly increase the amount of funding available for orangutan conservation, for example, by explicitly giving the private and local community sectors roles in managing orangutan populations and getting them to fund it. Or we employ a triage approach, and officially give up on those populations that we cannot realistically save.


But a lack of funding is not the full story. How the available funds are spent is probably much more important. For example, it is highly likely that only a small part of the officially allocated government budgets for protected areas is actually spent on threat management. In my experience most funds are used for salaries, infrastructure, cars, workshops etc., with few operational funds remaining.


At least a quarter, but probably more likely about half the total funds actually spent on (not just allocated to) orangutan conservation goes to rescues, rehabilitation, and reintroduction. This achieves a lot of public and media attention, and keeps the plight of the orangutan firmly in the global view. With an average cost per successfully released orangutan of $44,121, however, this is a highly cost-ineffective strategy compared to spending the same funds on the protection or sustainable management of orangutan habitat (and the important forest ecosystem services that these habitats deliver).


Given the challenges and lack of capacity and funds to address them, a logical and pragmatic approach would be to steer the limited resources toward those areas and strategies where they can have the biggest impact.


We can blame many for their failures to effectively protect orangutans: the government for rarely enforcing conservation laws, and giving out forest conversion licenses left, right and center while entirely ignoring that protected species occur; the plantation sector for happily converting forests into non-forest largely disregarding the presence of orangutans, or killing them if needed; or the local community sector which has also played a major role in converting forest to agriculture land and is another important factor in orangutan deaths.


But ultimately there is only one group of people that can initiate change for the better, and that is us, the orangutan conservation community, the people on the ground, the donors, the scientists, and all others who have made it their business to save species like the orangutan. We need to stand up as a united front, coordinate among ourselves and with other stakeholders, and present all other relevant stakeholders with a clear plan of action. What to do next so that the limited funds are spent on actions with the biggest benefit for orangutans?


Indonesia has a national action plan for orangutan conservation for 2007 to 2017, developed through the USAID-funded Orangutan Conservation Services Program. By next year, we need a new plan. And that plan needs to show who will do what, where, when, with which funds, and targeting which outcomes. This will require a level of strategic planning, transparent reporting and accountability not yet encountered in orangutan conservation.


As long as we all stay comfortable in our well-meaning but poorly strategized and coordinated actions, we will never stop the rot in orangutan conservation. As a community, we urgently need to step up our internal collaboration in Indonesia, and engage better with government and the business sector. This needs to create policies and actions that will finally start saving some orangutans and the important forests in which they live.