China will build in Karachi four of eight submarines that it is selling to Pakistan. 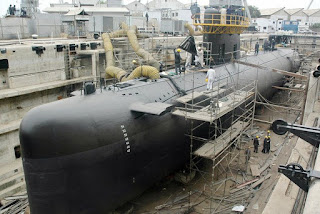 
Pakistan’s Minister for Defence Production Rana Tanveer Hussain told at the inauguration of the Defence Export Promotion Organisation (DEPO) Display Centre in Islamabad that the deal for the acquisition of submarines from China had been finalized and four of them would be built in Karachi.


He said construction of the submarines would simultaneously begin in Pakistan and China.


China, he said, would transfer the technology to Pakistan for submarine construction.


The implementation of the agreement would augment the existing submarine-related capacity. One of the three Agosta 90-B submarines in Navy’s fleet — PNS Hamza commissioned in 2008 — was assembled at the Karachi Shipyard and Engineering Works. The other two Agosta 90-B submarines — PNS Khalid and PNS Saad — were also indigenously overhauled and retrofitted with air-independent propulsion (AIP) systems in 2011.


The deal was for Yuan-class Type-041 diesel-electric submarines equipped with AIP systems.


Navy has been pursuing different options for expanding its submarine fleet. Naval officials say that more submarines were needed to address force imbalance with India, which too is increasing and modernising its fleet of submarines.


Pakistan had earlier explored the options of buying submarines from France and Germany, but those deals did not materialise.


The shipyard is planned to be constructed by foreign investors on build-operate-transfer basis. Asia Times News & Features
Posted by Kerry B. Collison at 2:22 PM