After one year in office, the public is not satisfied with Jokowi 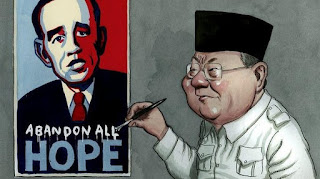 
Meanwhile, public satisfaction with Jusuf Kalla is currently 42.1 percent, down from 53.3 percent.Indo Barometer executive director M Qodari explained that most respondents were not satisfied with the government's economic performance.

“The public pays serious attention to the economy. When asked about the failures of the Jokowi-Kalla administration, the four top answers related to the economy,” said Qodari as reported by kompas.com on Thursday.


Similarly, the public satisfaction rate with cabinet ministers declined to 37.1 percent, down from 46.8 percent in March.


Respondents also think that Jokowi failed to create jobs, failed to control his ministers and failed to fight against corruption.


Meanwhile, those who are happy with the government's performance say that the government has been successful with its health program, education programs and its fight against narcotics.


thejakartapost
Posted by Kerry B. Collison at 2:48 PM