Battle of Aleppo is end of history in the Middle East 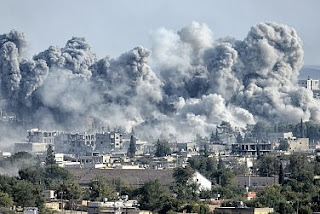 Russia’s possible victory in Syria will mark the end of western hegemony over the Middle East, and historians are bound to single it out as the defining foreign-policy legacy of Obama’s presidency.


On Monday, Barack Obama administration fulfilled its week-old threat to ‘suspend’ bilateral talks with Russia over Syrian crisis. Are the dogs of war being unleashed?


The thought may seem preposterous but tensions are palpable. 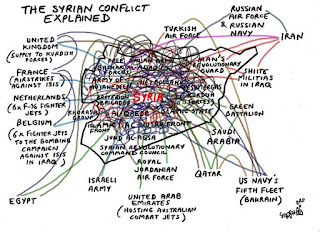 The US spy planes are spotted ever more frequently in the Eastern Mediterranean and the Black Sea over Russian bases, especially Tartus and Hmeimim in Syria.


Russia has deployed SA-23 Gladiator anti-missile and anti-aircraft system in Syria, first-ever such deployment outside Russia. The western analysts see it as pre-emptive step to counter any American cruise missile attack. Russia is not taking chances.


The Defence Ministry in Moscow said the deployment is intended “to provide protection for the naval logistics facility in Tartus and the Russian Navy’s task force”.


Moscow factors in that US may use some rebel groups to ensure that Russian “body bags” are sent to Moscow, as threatened explicitly by US state department spokesman John Kirby last week. Moscow suspects American hand in the missile attack on the Russian embassy in Damascus – “Brits and Ukrainians clumsily helped the Americans”, a Russian statement in New York said on Tuesday.


Indeed, passions are running high. There could be several dozen western intelligence operatives trapped with the rebel groups in east Aleppo. This is one thing.


Clearly, the turning point was reached when the US and western allies undertook a fierce air attack on the Syrian army base at Deir Ezzor lasting an hour and killing 62 government troops. The US explanation of that being an accident lost credibility, since within an hour of the air strike, extremist groups of al-Qaeda followed up with ground attack as if acting in tandem.


Trust has consequently broken down. The Russians are convinced that the US was never really interested in separating the ‘moderate’ groups from extremists despite repeated promises, because Washington sees use for al-Qaeda affiliates, which happen to be the only capable fighting force to push the ‘regime change agenda in Syria.


Put differently, Russians are inclined to agree with what Tehran has been saying all along. Moscow, therefore, switched tack and put its resources behind the Syrian operations to capture the strategic city of Aleppo. The military campaign is within sight of victory.


That is, unless there is a US intervention in the coming days to tilt the military balance in favour of extremist groups that are trapped in the eastern districts of Aleppo with supply lines for reinforcements cut.


The main thrust of the multi-pronged attack by government forces, backed by crack Hezbollah units and Shi’ite militia, is from the southeast of Aleppo with massive Russian aerial bombardment and a brigade-strong Russian contingent positioning itself reportedly in the rear to reinforce the main attack if need arises.


The Russians also control Castello Road leading to the north toward Turkish border, which was the last remaining supplying route for the extremist rebel pockets in east Aleppo.


With no prospect of getting reinforcements, facing relentless air and ground attacks from the north and south, the rebels are staring at a hopeless battle of attrition.


The point is, with the fall of Aleppo, Syrian war becomes de facto a residual military operation to purge the al-Qaeda affiliate Jubhat al-Nusra from Idlib province as well, which means regime forces would secure control over the entire populous regions of Syria, all main cities and entire Mediterranean coast. In a nutshell, Syrian war ends with President Bashar al-Assad ensconced in power.


The specter of ‘total victory’ for Assad haunts Washington. It explains the string of vituperative statements against Moscow, betraying a high level of frustration.


Theoretically, Obama can order missile attacks on the victorious Syrian government forces. But that will be like pouring oil on fire. On Saturday, Russian Defense Ministry warned Pentagon that any US military intervention to remove Assad would result in “terrible tectonic shifts” across the region.


The threat was left vaguely suspended in the air. But on Sunday, the powerful advisor on foreign affairs to Iran’s Supreme Leader, Ali Akbar Velayati, was pretty much blunt, warning Washington that any direct US intervention would be a “suicidal action” and will only turn out to be “their (American) third military defeat in the region after Afghanistan and Iraq, and it will be a stronger defeat”.


However, if Obama decides against the war option, three other reasons can also be attributed. One, Washington’s equations with Ankara and Riyadh are hugely uncertain at the moment and both regional allies are key partners in Syria.


The US-Turkish ties remain volatile not only due to the attempted coup in July but also because of the US’ tie-up with Kurds and growing Turkish suspicions regarding its intentions in Syria.


On the other hand, Riyadh is mulling over the best way of drinking from the chalice of poison that the US Congress prepared for King Salman in the form of the ‘sue-the-Saudis-for-the-9/11’ bill.


Two, President Recep Erdogan is unlikely to gamble another confrontation with Russia when Turkey’s legitimate interests in Syria can be secured by working in tandem with President Vladimir Putin at the negotiating table.


Above all, Turks are realists and their excellent intelligence apparatus inside Aleppo would have reported back by now that the fall of the ancient city is a fait accompli.


Third, most important, Obama is unlikely to lead his country into the vicious war zone without any clear-cut objective to realize when the curtain is coming down on his presidency. In the current state of play, Assad stands between the West and the deluge.


But what rankles is that Russian victory in Syria marks the end of western hegemony over the Middle East, and historians are bound to single it out as the defining foreign-policy legacy of Obama’s presidency.


Certainly, Russians cannot but be sensing this. Moscow may offer at some point a face-saving exit strategy – but only after the capture of Aleppo.


After all, there is really no hurry between now and January to salvage Russia-US ties. The tragic paradigm is best evoked by quoting Omar Khayyam’s lines – ‘The Moving Finger writes, and, having writ, Moves on”.


The debris of Russia’s ties with the US lies all around and no one knows where to begin a clean-up. Things have got physical when Obama called Kremlin leadership as “barbarous” in regard of Aleppo.


On Monday, Moscow explained its decision to suspend cooperation in getting rid of excess plutonium (that could be used to make nuclear weapons) as due to “the emergence of a threat to strategic stability and as a result of unfriendly actions” by the US.


Yet, it was also a decision that Moscow could have deferred until Obama left office. After all, it meant suspending the sole Russian-American nuclear security initiative carrying Obama’s imprimatur.


Moscow couldn’t resist debunking a Nobel who promised to ensure “America’s commitment to seek the peace and security of a world without nuclear weapons,” but actually enhanced the role of nuclear weapons in US security strategy.


Ambassador MK Bhadrakumar served as a career diplomat in the Indian Foreign Service for over 29 years, with postings including India’s ambassador to Uzbekistan (1995-1998) and to Turkey (1998-2001).
Posted by Kerry B. Collison at 2:28 PM