OBAMA AND THE SAUDIS CELEBRATE 9/11 - why does Obama still ingratiate himself in front of the Saudis and honour them as allies while berating and disadvantaging Israel in favour of Iran? 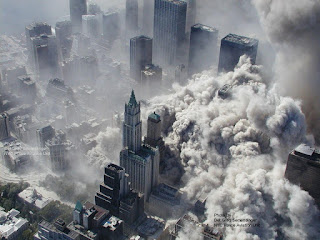 Fifteen of the 9/11 terrorists were al-Qaeda Saudis. Osama Bin Laden was, and still is, a favourite son of the Saudis, the Taliban is still supported by, and is indeed a creation of, the Saudis, ISIS has had substantial monetary and idealistic support from the Saudis and Prince Mohammed’s adventure into next door Yemen in the south of the peninsula hasn’t gone unnoticed. 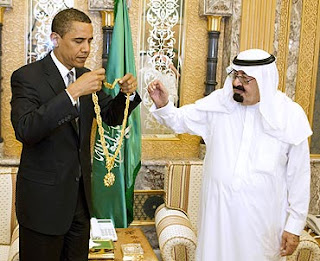 why does Obama still ingratiate himself in front of the Saudis and honour them as allies while berating and disadvantaging Israel in favour of Iran?

America and Obama have decided to side with the Sunnis as the most dominant (and the most ruthless) form of Islam that is the basis of the proposed ISIS caliphate, but Obama’s and Hillary Clinton’s mistakes with installing successive Shia led Iraqi governments and settling an insane Iranian nuclear deal have led to a resurgence of Shia Islam that threatens across Iraq and spans Syria to Israel... and that’s what Netanyahu is furious about.


Thanks to consecutive US Administrations the Middle East is a dog’s breakfast of Islamic horror that has killed millions with millions more unknown refugees (many not Syrian) flooding Europe via a compliant Turkey into the welcoming arms of Merkel's Germany.


Hillary's involvement with Libya's regime change has led to this and many more shipments of refugees leaving Libya for Italy and Greece. But Libya is yet another sick story.


The Saudis have worked hard to destroy the US economy using its sole asset of oil, yet Barack Obama still bends his knee to this the most decadent anti-Western seat of terrorism on earth.


Barack Obama has ensured that the Middle East will soon be composed of glassed deserts now that Iran can be certain of the bomb and that Israel is certain to try to prevent it.


Thanks to Obama’s deal-making, Iran is now supporting and supplying material and know-how to the madman Kim Jong-un of North Korea. And that's yet another sad story.


What is in the redacted 28 pages of the report that has just been revealed into the Saudi involvement in 9/11 is not known but what is crystal clear is that Obama vigorously resisted the release of the 28 pages and the Saudis threatened to withdraw $750 billion in assets from America if the pages were disclosed.


Hmmm, so the Wahhabist devils, along with Obama, were desperate to have this information remain under lock and key. Surely a reasonable person was entitled to ask why?

And why does Obama still ingratiate himself in front of the Saudis and honour them as allies while berating and disadvantaging Israel in favour of Iran?


New York mayor at the time of the 9/11 attack, Rudy Giuliani, claimed a Saudi prince had given him a cheque for $US10,000,000 in an effort to persuade him to deflect responsibility away from the Saudi kingdom. The former mayor said he tore the cheque up and returned it, declaring: “His money he can keep and go burn in hell. The American people need to know exactly what was the role of the Saudi Arabian government in the attacks: We are entitled to know who killed our loved ones and who almost killed us all.”


US interrogation of al-Qaeda members Ramzi bin al-shibh and Khalid Sheikh Mohammed disclosed that the latter was the main instigator of the 9/11 attack and that it was financed by members of the Saudi kingdom and had the full support of the radical Islamic spiritualist Wahhabist regime which operates mainly in the shadow of, and with the grace of, the Saudi family.


considers getting involved in the action


Perhaps Barack could take Prince Charles by the hand and settle down in a plush VIP seat for a weekend of exciting entertainment at Chop Chop Square where women will be clumsily beheaded and others hanged, crucified or have limbs severed for minor indiscretions.


Perhaps Barack might lean into the Saudi King’s ear and explain how well his renewable energy policies are going back home in increasing US reliance on Saudi oil. (No-one will bother explaining anything to Prince Charles.)


Barack Obama's love affair with Islam didn’t prevent him sanctioning the killing the Saudis’ favourite son hiding in plain sight under an arm of the Pakistan military, but his love affair endears him to the royal family of the original terrorists, financed openly by their brilliantly profitable, multi trillion-dollar creation of Western halal certification.


And Obama’s depth of sorrow for the families of the 3,000 killed and thousands more maimed in 9/11 was insufficient enough for him to prevent the building of The Ground Zero "Victory" mosque standing adjacent to the craters of the twin towers. He instead encouraged it.


The Saudis have used Obama, the Clintons and the Bush families in the same way as China uses Dastyari (and others)... with money. All three Presidential families have been given foreknowledge of massively profitable Saudi investments in America that were not necessarily in America’s interest.


So the reason that Obama consistently defends and bows to the Saudis could be the same reason that Dastyari publicly sides with the Chinese when its investments are not necessarily in Australia’s interest.


And we still wonder how it is that Donald Trump is a likely winner in November?

Four-time Walkley Award winning political commentator and Churchill Fellow, has returned to the fray over concern that the integrity of news dissemination is continually being threatened by a partisan media.
Posted by Kerry B. Collison at 2:14 PM