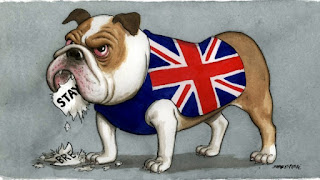 
“I can’t meet you in my town,” he said in his email. “We can meet up in a little town nearby and have a coffee. About 10am would be fine.”


We’d emailed back and forth a couple of times. He knew I had come all the way from Australia. The day before however, the emails stopped. I was going to London anyway and he was on the way, but he didn’t know that.


Last time I was in the UK, it was about a two hour drive to Luton.  I left four and a half hours early. I didn’t expect they would shut the M6. It took six hours to get there. I kept emailing but got no response. I stopped in the town anyway and had some lunch. He didn’t show, so bitterly disappointed, I carried on to London.


That was pretty rude, I could have been really pissed, but there had been a Jihadist attack the day before on London Bridge and Tommy Robinson had gone to cover it.


The funny thing is, I went to London Bridge too and looking at his Youtube video, we missed each other there by a couple of hours.


But how can I be mad at someone who has given so much to my country and my people? In the two World Wars, young men volunteered in the thousands. There hasn’t been too many volunteering to help Tommy.


He had to fight not only against a murderous enemy. He also had to fight against his own treacherous Government. The enemy weren’t far away either. They lived in his town, even in his street.


The worst part is, that many of those who should have been standing shoulder to shoulder with Tommy, have been turned against him by the treacherous thugs who have been infesting the country since before the Second World War.


“They” despise ordinary, white, working class people. "They" despise us because we never fell for their evil ideology. We never rose up, smashed the State and murdered our leaders for them so that “they” could rule over us with a beneficent fist.


There are lots of “them” and they have different motivations. There are different groups with different loyalties and different agendas.


But they all share a hatred of the ordinary white indigenous people who owned that country, who built that country and who defended it with their blood. Anti-white racism binds them and drives them, even though many of them are white themselves.


It is like a disease that clouds the brain. Don’t they realise? They think that if they succeed in their plans, that their new masters will be grateful to them.


Do they think they will all cheer together and carve up the spoils with the Jihadists, just like the socialists in Iran did after the revolution.


Oh no - wait! That isn’t what happened. The Jihadists lined the socialists against a wall and shot them all.


These anti-white racists have spent their time and effort brainwashing the British people into believing that indigenous White people have no right to their own nation. Meanwhile we are told that Africans, Chinese, Indians, Pakistanis and even invented racial groups like Palestinians, all have a right to their own countries.


So, when dark skinned Muslim gangs started assaulting, raping, enslaving and pimping English schoolgirls on an industrial scale, these anti-white racists made sure that the police didn’t dare touch them.


For decades, these evil invaders were given a free pass to do whatever they liked with these poor wretches, while anyone who tried to raise the alarm was leaned on in the heaviest possible way.


No white person in authority dared to complain. The whistle was finally blown when a Pakistani prosecutor was appointed. Not subject to the horrendous anti-white racism that the indigenous British suffered, this man was able to actually do his job. Fortunately, he was a decent and honest man and he began prosecutions which rocked the nation.


Yet still, “they” tried to supress it. Sarah Champion, the Labour MP who warned that Pakistani men were raping white English schoolgirls was sacked for her sins by Jeremy Corbyn, the leader of the British Labour Party long after this was proven.


How does that work? Tell the truth that your English constituents are being systematically raped by migrants and lose your job for it. Isn’t that what MP’s are supposed to do?


But that is how it is these days in the country of my birth, the once great wellspring of freedom and justice. In this day, anyone who even mentions, let alone complains about, anti-white racism is immediately branded as a racist.


This accusation is no small matter either, in England today. Charges of racism can have you removed from your job, can have your children taken off you or even have you thrown in jail.


Tommy Robinson was thrown in jail some years ago for fraud. He signed a guarantee for his brother-in-law’s loan papers. The loan didn’t go bad. It was paid back without any problem.


However, it was discovered that Tommy’s brother-in-law had exaggerated his income in the application. How was this discovered? Who would check on a loan that wasn’t delinquent, or even in arears?


And who was ever jailed for this crime. At that time, mortgage fraud was so prevalent that it led to a global financial crisis which almost turned into a catastrophe.


Yet of the hundreds of thousands of delinquent loans, only one person I ever heard of went to jail. Tommy Robinson, who didn’t even borrow any money - coincidence?


Last week, Tommy once again broke the law. He reported on a case which had a media blackout slapped on it. “Trust us,” said the judiciary to the English people. “Just don’t watch us and we will do the right thing. Don’t worry, we’ve got your backs on this one.”


But I know myself that when anger builds, it builds to an intensity that is terrible to behold. I think that anger is building now in the English. I shouldn’t feel good about that, yet we are in a situation which has no good solutions and I cannot see a way of avoiding catastrophe.


I think many people are still filled with trepidation at what might be unleashed. Many more are past the point of caring. Some feel that they have nothing to lose and that is a dangerous situation to put people in.


I will leave you with a man whose wisdom and foresight I don’t seem able to escape:


It was not part of their blood,


It came to them very late


With long arrears to make good,

They were not easily moved,


They were icy-willing to wait


Till every count should be proved,


Ere the English began to hate.

Their voices were even and low,


Their eyes were level and straight.

It was not preached to the crowd,


It was not taught by the State.


No man spoke it aloud,

It was not suddenly bred,


It will not swiftly abate,


Through the chill years ahead,


When Time shall count from the date


That the English began to hate.


Harry Richardson is a long-time student of Islam and author of best seller, "the Story Of Mohammed - Islam Unveiled', http://thestoryofmohammed.blogspot.com.au